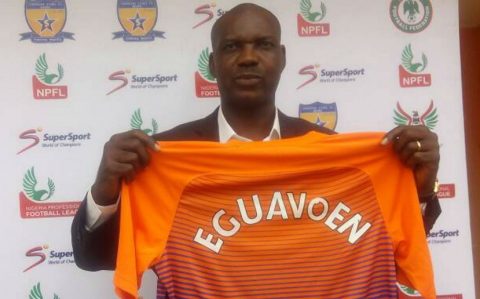 (AFRICAN EXAMINER) – Akure, of June 9, 2017 – Following a string of poor performances, Augustine Eguavoen, the Coach of Sunshine Stars FC of Akure, has unceremoniously quit his job in the Nigerian Professional Football League (NPFL).

The management of Ondo State Football Agency (ODSFA) confirmed on Friday in Akure that the Technical Adviser, who joined the club in April had left his post due to what he called “frustrating performance of Nigerian referees”.

Mike Adeyeye, Secretary to the Committee for repositioning ODSFA, made the disclosure in an interview with newsmen in Akure.

Adeyeye said the management never had any problem with the coach but that he decided to walk away from the team and Nigerian football in general due to “bad attitude and poor performance” of referees in the competition.

He noted that the coach had improved the performance of players and the team in general, but left because of the system of refereeing matches that always favoured some teams that “belonged”.

“He left because of Nigerian referees, he never complained about us, I sympathise with him, and he has left Sunshine and Nigerian Football for good.

“I don’t see Nigerian football improve in the next 10 years if it continues to be like this, they are stage managing everything in Abuja,” he said.

However, asked whether any form complaint had been lodged with the League Management Company (LMC), Adeyeye said that it would be futile to waste N250, 000 to do so.

“Look at the good goal that was disqualified in Ibadan, it is be frustrating,” he said.

Sunshine Stars currently occupies the 17th position on the NPFL table, with goal difference separating them from the relegation zone.