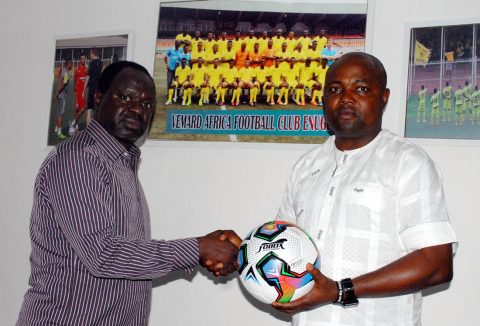 (AFRICAN EXAMINER) – Enugu based Nation-Wide League One side, Vemard Africa F.C, has entered into a kit sponsorship deal with FODOX, a Hungarian based sports kit manufacturing firm.

African Examiner Sports reports that the club, which is currently under the tutelage of a foreign coach, narrowly missed out in picking a ticket to feature in next season’ Nigeria National League (NNL) after a 12-11 penalty kicks loss to Delta Force in the play off which took place in Akure, the Ondo state capital, South- West Nigeria, last  weekend.

Unveiling the deal before sports Journalists Wednesday at the Ogui Road Enugu, office of the club which is just 9 months old, its Chief Executive officer, (CEO), Chidi Emmanuel Okonkwo, and the kit manufacturer, Fofana Lassina, described the deal as a watershed in the annals of lower league football in Nigeria.

Elated Okonkwo, expressed the hope that the partnership would  propel his wards to make amends for the lost NNL ticket next season.

According to him “Vemard is a God divine project, and this partnership is a right step in the right direction, because it is not only for provision of kits but for exposure of our coaches to coaching courses, and exposure of players to oversee training and other aspect of football development,’’

The CEO, who had excelled  with former Ghana league champions, Berrekum Chelsea F.C., said his dream is to set a standard in Nigeria’s lower league  soccer.

“In the area of the league, we just lost out on qualification to Nigeria National league after winning all our matches, but one in the Nation-Wide League One. We are taking it step by step because we decided to play in the nationwide league one and we will continue to give our all till we reach NNL and from there to the Nigeria Professional Football League (NPFL),’’ he stated,

Okonkwo hinted  that the club is planning to build its own stadium and have an academy where they hope to  groom and graduate players who have been taught the club’s tradition, adding that his dream is also to groom talented players who will go to Europe for greener pasture.

” My dream is equally to make the club one of the biggest in Africa in the next five years. The club has come to stay, and nothing will stop our Dean”Okonkwo declared.

“We want to establish Vemard club in other countries like Ghana, Cote d’Ivoire and Hungary but my immediate aim in Nigeria is to have some of my players in Nigeria national teams soon,’’

In his remarks, the FODOX boss, said the partnership is part of his contribution towards the development of  football  in Africa.

“I am trying to say thank you to Nigerian people and I feel well partnering with Vemard Africa plying their trade in Nigeria. As a football Agent, I am out to help African football with African brand of jerseys. So I am giving Vemard my business and support. Here in Africa, we can do more in football because we have talents but we do not have the materials,’’ he said in smattering English.

Lassina disclosed that his company specialises in production of other sports equipment for Basketball, Handball among others.

The foreigner added that “this partnership is for life and I will always be there for Vemard till the end of its business in football,’’ he stated..