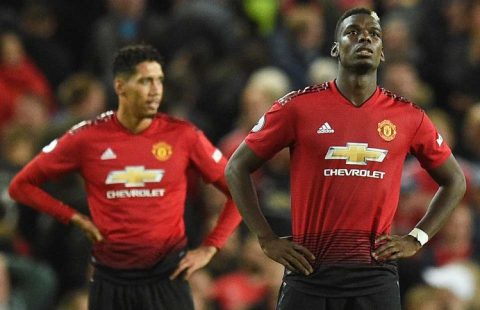 (AFRICAN EXAMINER) – A woeful Manchester United suffered their fifth straight away defeat, in all competitions, with a 4-0 English Premier League (EPL) hammering by a vibrant Everton at Goodison Park on Sunday.

Manchester United did not manage a shot on target until the 86th minute.

It was not surprising then that they fell to their sixth loss in eight games since their memorable victory at Paris St Germain (PSG) in the UEFA Champions League.

The euphoria felt in Paris and at the start of Ole Gunnar Solskjaer’s reign already seems a distant memory after a performance that lacked not only quality but aggression and fire.

“We just didn’t perform. That was not worthy of a Manchester United team,” said Solskjaer.

“We hold our hands up and apologise to everyone associated with the club,” added the Norwegian who went over to the travelling Manchester United supporters after the final whistle.

“Everton were better than us at all the basics. There are so many things that we need to do better to get a result. Talent has never been enough.”

Manchester United must now somehow pick themselves up in time for the visit of Manchester City to Old Trafford for the derby on Wednesday.

For Marco Silva’s improving Everton, in seventh place, this was their third top-six scalp in as many home games following victories over Chelsea and Arsenal.

Brazilian Richarlison fired Everton ahead in the 13th minute with an acrobatic high volley after Dominic Calvert-Lewin flicked on a long throw.

Gylfi Sigurdsson made it 2-0 with a low drive from over 25 yards out that Manchester United goalkeeper David De Gea was slow to react to as the home side ran rampant.

Solskjaer took off the ineffective Fred for Scott McTominay at the break while Ashley Young came on for the injured Phil Jones at the back.

But the change in personnel made no difference to the flow of the game.

Everton were faster, sharper and more aggressive while Manchester United’s midfield pair of Nemanja Matic and Paul Pogba were spectators for most of the game.

Lucas Digne then blasted in the third in the 56th minute.

That was after De Gea punched out a corner kick to the French full-back with Manchester United struggling to get even a foot in the game.

Icelandic playmaker Sigurdsson then put substitute Theo Walcott through with a clever pass through the legs of Victor Lindelof which the former Arsenal striker confidently converted.

“The first goal was the key,” said Sigurdsson.

“After that, we defended really well. It was important for us to get the next goal after going 2-0 up. It gave us constant belief and we controlled the game after that.”

Manchester United, eliminated from the UEFA Champions League by FC Barcelona on Tuesday, remain in sixth, outside the four qualification spots for next season’s campaign.

Statistics showed the Red Devils, who had not lost five straight away games since 1981, ran 8.03 km less than Everton.