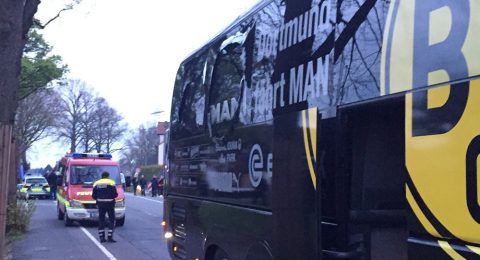 The German team confirmed that defender Marc Bartra was slightly injured in the eruption which occurred near their hotel, adding that he required hospital treatment.

The match has been fixed at Dortmund’s Westfalenstadion at 17:45 BST Wednesday. Police confirmed there had been three explosions in the area of the team bus.

On the incident, Dortmund tweeted: “A bomb exploded at the team bus next to the hotel.

“The players are safe. There is no danger at the stadium.”

However, windows of the bus were broken. The explosion occured six miles from the stadium around 18:00 BST.