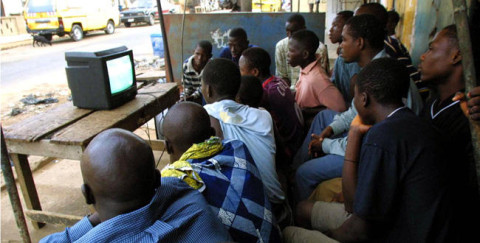 As the 20th FIFA world cup kicks off today in Brazil, the Plateau State Police Command has banned all Football viewing centers in the State.

The Command’s Public Relations Officer ASP Dominic Esin , in a press statement made available to African Examiner in Jos on Thursday, said, “This is to inform members of the Public particularly owners of football viewing centers and football fans that there is a total ban on football viewing centers in every nook and cranny of the state in respect of the Brazil 2014 FIFA world cup. 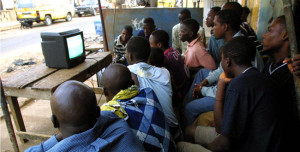 A cross section of soccer fans at viewing centre

It reads, “This precautionary measure is aimed at forestalling warnings of impending attacks on these viewing centers by any person or group of persons and to secure an atmosphere of peace and security on the Plateau.

The Command advised football fans to stay away from such centers or watch all the matches of the FIFA world cup in their respective homes.

The statement warns that,  “Anyone who violates this order which takes effect immediately will face the full wrath of the law”.

It would be recalled that on the 24th, May, 2014, there was a failed attempt on a viewing center, which led to the death of four persons, prompting the ban.

Also, barely 24 hours ago, a similar ban was imposed in Adamawa State.