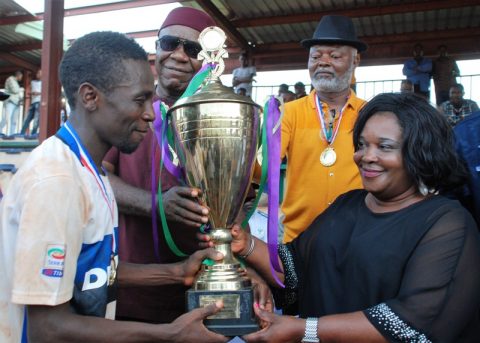 African Examiner Sports reports that the game played at the government field Nsukka, attracted sports enthusiasts across the state, including a board member of the Nigeria football federation (NFF), who is also chairman of Enugu state football Association, (FA) Hon. Chidi Ofo Okenwa, the state permanent Secretary, Ministry of youth and sports, Barrister Ngozi  Ani, as well as other members of the  state football governing body.

The State League had been under the sponsorship of YKC, a sports facilities firm owned by a philanthropist Ndubisis Young for four  years new.

It would be recalled that the 2019 Champions of the league, Inter FC lost the 2018 edition finals to Inga’s FC of Enugu.

In his remarks at the event, Hon. Okenwa, had thanked the sponsor, chief Ndubuisi, for his kind gesture over the years, calling on other well to do individuals and cooperate organizations in the state to imbibe the culture of giving back to the society via sponsorship of programmes that will impact on the lives of the youths, sports inclusive.

According to the state FA chairman, aside, remaining a unique unifying factor, sports, especially football, has helped in taking jobless idle youths off the streets, a development that had continue to help in reducing crime to the barest minimum in the society, including Enugu state.

He noted that the state league had over the years, assisted in fishing out hidden talented youths from various localities in the state, who were groomed and exposed to the football world, and are today earning living through football career.

Okenwa however, assured that the state FA, under his watch will continue to do everything within its power in taking grassroot soccer to a greater height.

The Champions, smiled home with 0ne Hundred Thousand Naira  (N100,000) a giant trophy, and medals, while, the  runners up players received certificate and medals.