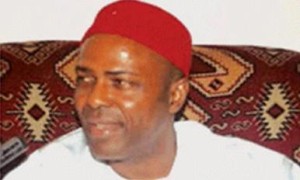 Former National Chairman of the defunct All Nigeria People’s Party and an elder of the All Progressive  Congress, Dr Ogbonaya Onu has described the fourteen years of  federal administration of the People’s Democratic Party as. a monumental failure to be rejected by Nigerians in  2015.
Speaking in an interview with the Nigerian Tribune, the former Governor of old Abia state explained that the ruling party has lost the confidence of Nigerians by its inability to harness the nation’s huge human and material resources to provide security, employment opportunities, revitalized infrastructuresand reduce poverty.

” The  emergence of APC is driving changes within PDP. They are running helter shelter and wondering how best to contain us. My advice to them is that they should worry less about us. They should face Nigerians who want change”, he explained.

“Both Nigerians within and outside the APC want change. We are telling the ruling party that you had opportunity to rule the nation,to bring security to the nation,to give jobs to the unemployed,to build infrastructure,to give prosperity. The PDP had the opportunity for fourteen years. Nigerians want
answers”, he lamented.

“if you check the constitution,the primary function of government is to secure lives and properties of her citizens. Can PDP claim a pass mark in that area? There is so much unemployment in the land. PDP should ask itself if it had done well on job creation? So many Nigerians are getting poorer according to a federal agency despite high oil prices. How can PDP defend that before Nigerians ” ,the former governor of old Abia state questioned.

” So whether there is a mid term report or a full term report,the fact is there are indexes to measure performance of government. PDP must answer to Nigerians whether they have done well pr not. As they have not done well,Nigerians should try another party. It is time for PDP to go into opposition. The APC will do better than what the nation has experienced in the last fourteen years”, he said.

Predicting that plot to destroy APC will fail, Onu said it will be difficult for the PDP to destabilize the opposition coalition because ” it is the general public,the average citizen who want a change of government,adding ” it is going to be difficult to derail the APC.

“It is not the eleven states we are controlling that is our strength; it is the average Nigerians who want change and they are doing everything possible to encourage PDP”, the former presidential hopeful said.