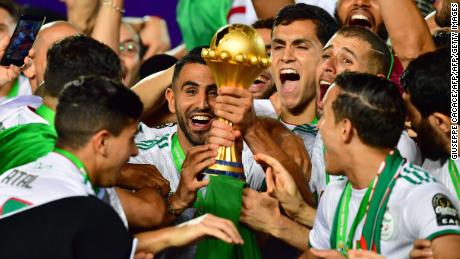 (AFRICAN EXAMINER)  – Football-crazed Algeria burst into a paroxysm of euphoria on Friday night as the country’s national team emerged triumphant at the Africa Cup of Nations final held in Egypt.

Firecrackers lit up the night sky and cries of joy filled the air in Algiers as soon as the final whistle blew in Cairo International Stadium, with jubilant crowds, many of them draped in Algerian flags,  taking to the streets of the capital to celebrate the 1-0 victory over Senegal.

In a country where half of the population is under 30 and was not yet born when Algeria’s squad won its first African trophy back in 1990, the victory of coach Djamel Belmadi’s players – nicknamed the Desert Foxes – was a landmark moment.

“This goes beyond sport. It is a question of national pride,” Amina, a 24-year-old student, told Al Jazeera

Algeria beat Senegal in 1-0 victory, thanks to early strange  goal by Baghdad Bounedjah.