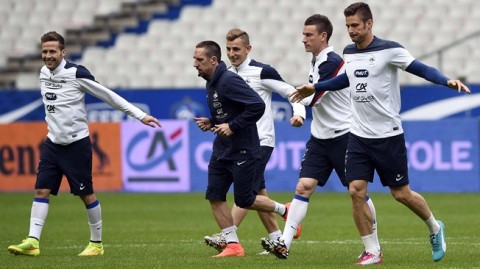 While Didier Deschamps’s France side garnered plaudits by sweeping past Honduras 3-0 and crushing Switzerland 5-2, a more cautious tone has been heard as they prepare for Monday’s FIFA World Cup Round of 16 tie against Nigeria.

A much-changed team could only draw 0-0 in their final Group E fixture against Ecuador on Wednesday. Both Bacary Sagna and Morgan Schneiderlin suggested that France were potential champions after the stalemate at the Maracana, but centre-back Laurent Koscielny has since introduced a note of caution as Les Bleus prepare for Monday’s game in Brasilia. 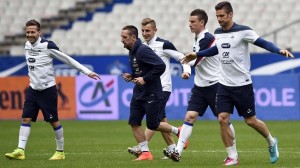 It is only seven months since France had to overcome a 2-0 deficit to beat Ukraine in their qualifying play-off and the Arsenal defender says that it would be unwise to look too far ahead. “The first objective was to get through the group phase. Now it’s to go as far as possible,” he said.

“We are competitors and we are ambitious, but we know that we have opponents against us and that we might lose. We’re aware of our qualities. Something changed after the Ukraine game, but anything is possible in a knockout match and for the moment we’re only focusing on the last 16.”

Koscielny could line up in central defence alongside Raphael Varane at the Mane Garrincha National Stadium as Mamadou Sakho is doubtful due to a thigh injury. The Liverpool centre-back had to go off in the 61st minute of Wednesday’s game and trained on his own on SaturdaYohan Cabaye will come into the team in place of Schneiderlin after missing the Ecuador game due to suspension, but Paul Pogba’s place is under threat from Moussa Sissoko.

After a laborious 0-0 draw with Iran in their opening game, Stephen Keshi’s Nigeria side booked their place in the last 16 by edging Bosnia-Hercegovina 1-0 and then impressed in a 3-2 loss to Argentina. CSKA Moscow winger Ahmed Musa twice produced immediate replies to goals from Lionel Messi, only for Argentina left-back Marcos Rojo to net a 50th-minute winner.

“We need to defend well, take our chances up front and learn from the Argentina game,” Musa said. “In the second round, it’s winner takes all. I know with hard work and God’s support we shall make history. But prayers without hard work is nothing, so we need to be at our best against France to make it happen.”

Chelsea forward Victor Moses missed the Argentina game due to a muscular complaint, but he trained with the squad in Brasilia on Saturday. Winger Michael Babatunde is out after his wrist was fractured by a shot from team-mate Ogenyi Onazi during the match against Argentina, but Keshi has an otherwise fully fit squad to choose from.