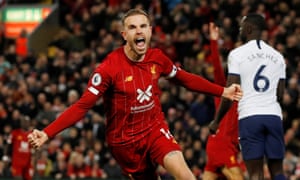 (AFRICAN EXAMINER) – Liverpool recovered from the shock of going behind in the first minute to beat Tottenham Hotspur 2-1 at Anfield on Sunday and restore their six-point lead at the top of the Premier League.

Jordan Henderson equalised after the break before Mo Salah tucked away a penalty to complete the comeback as Liverpool’s marauding start to the season continue.

Harry Kane’s stooping header after Son Heung-min’s deflected shot hit the crossbar had given Tottenham a dream start in their bid to win at Anfield for the first time in eight years.

Tottenham keeper Paulo Gazzaniga made a succession of superb saves to keep his side in front at halftime.

Son almost put Spurs ahead with an angled shot against the crossbar early in the second half but it was one-way traffic.

Tottenham were hanging on but right back Serge Aurier’s clumsy tackle on Sadio Mane after 74 minutes gave Salah the chance to put Liverpool in front and he made no mistake.

Tottenham are without a Premier League win on the road since January and have slumped to 11th, eight points behind the Champions League places./NAN