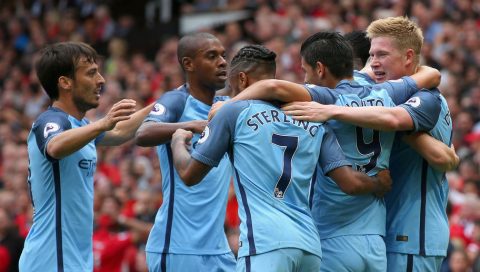 Pep Guardiola’s side are now uncatchable at the top of the table after United’s shock defeat to the bottom-of-the-table Baggies after Jay Rodriguez’s 73rd-minute strike sealed their fate.

City re-established a 16-point lead at the top of the table on Saturday when they ended a run of three successive defeats with a 3-1 victory away at Tottenham Hotspur.

Because of goal difference, United realistically needed to win all of their six remaining games and hope City lost their last five matches.

Guardiola said he wouldn’t be watching United’s game at Old Trafford on Sunday, but instead would be enjoying a round of golf with his son.

The Catalan has now won three titles in three different countries after three La Liga triumphs in Spain with Barcelona and three Bundesliga crowns with Bayern Munich and admitted it was one of his best achievements.

City need just nine points from their final games to set a new record for most Premier League points, while another 11 goals would see them set a new goal-scoring record.

It’s the third Premier League success for the club after the titles won in 2012 under Roberto Mancini and 2014 under Manuel Pellegrini with captain Vincent Kompany, David Silva, Sergio Aguero and Yaya Toure involved in all of them.