Maradona Writes Super Eagles off, Insists Argentina Are Not at Their Best Either 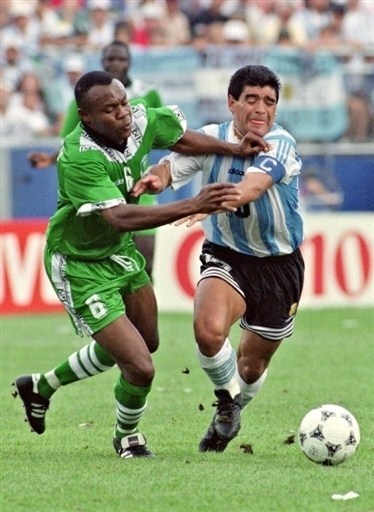 Former Argentina captain, Diego Amando Maradona has described the Super Eagles as ‘’inferior’’ ahead of next week’s last group F game between Argentina and Nigeria.

Maradona, who coached Argentina to the 20010 FIFA World Cup in South Africa said only complacency would make the Lionel Messi led side lose to the African Champions.

“It’s clear our rivals are inferior but this group could get us caught’’, Maradona said when asked about his Argentina’s chances.

He however, noted that his countrymen have not proved yet that they are ready to win the cup again, 28 years after he led Argentina to at Mexico ’86.

“Argentina victory have not proved they can be world champion again.

“I wish I could tell you they will win the trophy. They have potential. But so do Brazil, Holland and Germany,” he added.

“They know mistakes were made and they have to correct them in time,” stressed Maradona whose ‘Hand of God’ goal sent out England from that 1986 edition.

Argentina defeated tournament debutants, Bosnia 2-1 in their first game, but it was hard-going at times for Alejandro Sabella’s team.