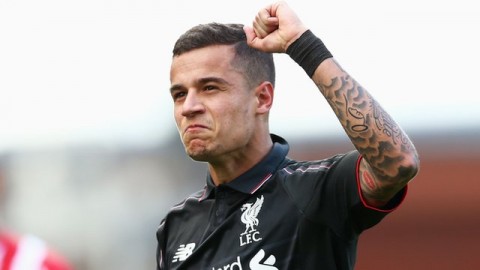 (AFRICAN EXAMINER) – Liverpool have reached an agreement with Barcelona for the sale of midfielder Philippe Coutinho, according to ESPN FC.

Multiple reports in both Spain and England suggest the two clubs have agreed a fee of £142 million (€160m, $192.7m), with Liverpool receiving £105m up-front and the rest in performance-related add-ons.

The full figure would make Coutinho, 25, the second-most expensive player in world football behind Neymar, who left Barcelona for Paris Saint-Germain last summer in a deal worth €222m (£200m, $263m).

Liverpool rejected three offers — the highest £118m — for Coutinho from the Catalan outfit last summer after the player filed a transfer request, with the English club’s owners, Fenway Sports Group, then holding a firm not-for-sale stance.

Coutinho is currently sidelined with a thigh injury and was among a number of Liverpool players who stayed behind as the rest of the team departed for a warm-weather training camp in Dubai following Friday’s FA Cup win.

He has not played in either of Liverpool’s matches since the winter transfer window opened on Jan. 1 because of a minor thigh problem, though manager Jurgen Klopp had said this week that he expected the Brazilian to be fit for next weekend.

Coutinho scored 41 Premier League goals since joining Liverpool from Inter Milan in January 2013, the 14th-most in the span since his debut. His 504 shots in that time rank fourth, while his 35 assists are sixth.

Inter, meanwhile, are set to miss out on a huge financial windfall as they did not insert a sell-on clause when they sold Coutinho to Liverpool for £11.7m, a source told ESPN FC in August.

Instead, the Italian side, along with Brazilian club Vasco da Gama — where Coutinho began his footballing career — believe they are only in line to receive a very small percentage of the transfer fee under FIFA’s solidarity mechanism.

The solidarity payment amounts to just 5 percent of the agreed transfer fee, with the buying club withholding that figure and then distributing it among clubs who qualify for payment. The full 5 percent would not be allocated between Inter and Vasco, with Liverpool having Coutinho on their books since he was 20 years of age.

Coutinho will reunite with former teammate Luis Suarez at Barcelona, after the Uruguayan striker left Anfield for the Camp Nou in 2014.

Barcelona, who host Levante in La Liga, lead La Liga by six points and are also through to the knockout stage of the Champions League. They will face Chelsea beginning in February, but Coutinho will not be eligible because he already played for Liverpool in the group stage.

Liverpool, fourth in the Premier League, made a transfer splash of their own this month by spending £75m to get Virgil van Dijk from Southampton — a world record for a defender./ESPN