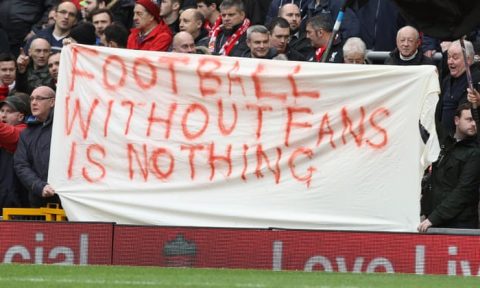 (AFRICAN EXAMINER) – Luis Enrique, Spain head coach, has likened playing matches behind closed doors as being “sadder than dancing with your own sister”.

He stated this in a YouTube channel, Colgados del aro, stressing that football won’t be the same without the crowd.

Elite football games are likely to be staged without fans present for the foreseeable future as part of measures to reduce the risk of spreading coronavirus.

“It’s sadder than dancing with your own sister.

“I saw some games from Germany over the weekend and it’s a sad sight. You can hear everything, and the intimacy of the better moments is lost.

“We have to remember, I guess that this is big business and I understand that with football back, it may serve as a way of helping people in dealing with confinement. Watching football and basketball in these circumstances is certainly odd.

“I would have been keen to get back to playing as soon as possible and would have had no fear. On a personal level, I’m not worried about the virus but aware that there could be an impact on older people and those susceptible to greater suffering. As a coach, I’m as equally anxious for football to return.”

The former Catalan boss hopes Spain will play some top-notch quality friendly matches in September but he is unsure because of the coronavirus pandemic.

“This new situation with everything shrouded in doubt is something we’ll have to deal with,” said the former Barcelona boss. We’re waiting for football to return and later down the line, plan a few friendly games.

“In principle, the Spanish national side should have a few games in September, but only when it’s safe to stage these. At present there are other more important matters afoot, so we just need to be patient.”