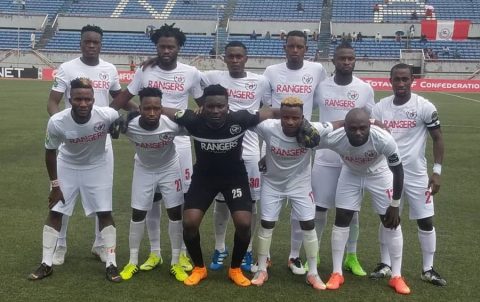 (AFRICAN EXAMINER) – The only Nigeria’s representative in the ongoing 2018/2019 Confederation of African Football (CAF) ,Rangers International FC  of Enugu on Sunday crashed out of the competition, after visiting club Sportive Sfaxien of Tunisia beat them 1-0 at the Nnamdi Azikiwe stadium, Enugu.

African Examiner Sports reports that the water tight defence of the visiting club side could not allow the Nigeria team penetrate their 18 yard box, a development that made them missed several scoring chances, especially during the first 45 minutes of the game.

Striker Nassim Hnid of Sfaxien scored the only goal of the match at exactly 73rd minutes into the 2nd half of the match which commenced at 2pm Nigerian time.

Meanwhile, despite defeating ASEC Mimosa of Ivory Coast 2-0 in Enugu on Saturday night Nigeria’s representative in the (CAF) Champions League, Lobi Stars of Murkudi, and the visiting opponent have crashed out of  the 2018\2019 continental soccer competition.

With the result, CS Sfaxien of Tunisia qualified with their neighbour Etoile du Sahel also of Tunisia with 12 and 10 points respectively.

Rangers  and Salitas FC of Burkina-Faso crashed out on 5 and 4 points respectively as Salitas lost their last match by the same margin to Etoile in Tunisia.

Speaking after the match, Rangers Chief Olugbenga Ogunbote said that his team lost to lack of concentration and hot weather.

According to him, “We have been having upper hand as in an attempt to score and pushed them to their half only to lose concentration from their free kick in which gave them the victory.

”It is unfortunate  that we lost the match and we are going home to do more work as this showed us that we still have a lot of work to do.

”Rangers have no other option at the moment than to accept defeat and go back to the league to fight for continental spot.

In his comment,  Sfaxien coach, Ruud Krol who spoke via an interpreter,  said that they knew from the beginning of the league that the road to success is difficult , but expressed happiness that they have surmounted the group stage.

”Today we play at an astro turf and the temperature is high but I feel happy that we won and qualified to next stage.

”We know  that it is going to be difficult and the fact that we won Rangers at home does not mean that the match is not tough.

”Rangers made it tough for us and I am happy that we came, saw and conquer and from here now we are going to work hard for the quarter-final stage” he stated.