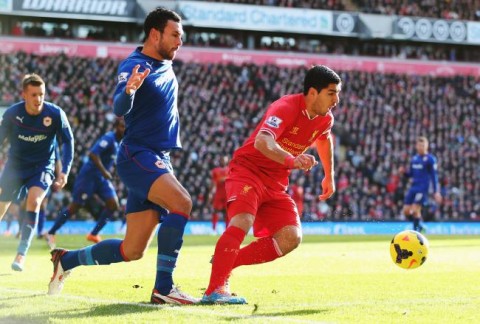 Liverpool boss Brendan Rodgers paid yet another glowing tribute to Luis Suarez as he inspired the 3-1 win over Cardiff which lifted the Reds to the top of the table. 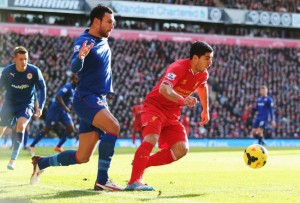 Suarez, who signed a new long-term contract with the Anfield side on Friday, scored two and set up Raheem Sterling in a one-sided first half to take his tally for the season to an astonishing 19 goals.

Jordon Mutch pulled one back after the interval for the troubled Bluebirds, who remain embroiled in uncertainty over the future of manager Malky Mackay.

But it was the display of Suarez, and in particular his decision to pass to Sterling when one-on-one with the goalkeeper himself, which impressed Rodgers.

He told the club’s official website: “It shows you the team player that he is.

“I thought he showed great humility as well, when Daniel Agger came on the field, he brought the armband straight to him because he’s the vice-captain.

“It shows you the humility of the man. Two brilliant goals, a genuine world-class player. The pivotal point of the team is really exciting and dynamic at the moment.

“It was an outstanding team performance. In the first half, we were exceptional – some of our movement and fluidity in our game was excellent.

“We controlled the game, scored three and maybe could have had one or two more. In the second half, we started brightly and looked like we were going to continue that momentum.”