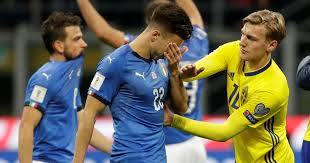 (AFRICAN EXAMINER) -One of world football’s most storied and successful teams will not be heading to next year’s World Cup in Russia.

Italy, who have appeared at the finals of every World Cup since missing out in 1958, were held to a goalless draw by Sweden in Milan. The Swedes advance to next summer’s tournament courtesy of an aggregate score of 1-0 for the playoff tie.

Played in front of 70,000 at Milan’s San Siro stadium, the pace was frenetic as the four-time champions looked to overturn the single-goal deficit from the first leg, with Giorgio Chiellini, Andrea Barzagli and Jakob Johansson all receiving early yellow cards.

Despite peppering the Swedish goal with shots over the course of 90 minutes, Italy’s formidable strike force could not break down their opponent’s defence.

Sweden head to the finals for the first time since Germany 2006. Italy won that edition of the tournament.

Four-time winners Italy won’t be the only big names who are missing FIFA’s centerpiece tournament next summer.

Perennial favorites the Netherlands, back-to-back South American champions Chile, and the United States, which had been a fixture at the finals for the last seven tournaments, all failed to make the grade this time around.

And another World Cup behemoth came close to crashing out – only a heroic, hat-trick performance by talisman Lionel Messi in their final game saved Argentina’s blushes. (CNN)