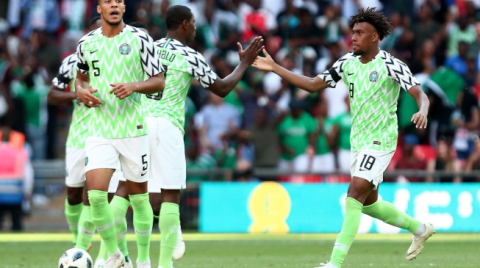 (AFRICAN EXAMINER) – Enugu state Governor, Ifeanyi Ugwuanyi,  has redeemed his 5 million naira pledge to the Super Eagles of Nigeria that recently crashed out of the ongoing  2018 world cup in Russia.

The governor had during a fund raising ceremony  organized by the nation’s Minister of Sports, Solomon Dalung and Nigeria Football Federation NFF via a committee in Abuja, prior to the world soccer fiesta pledged a donation of 5 million naira to the team.

Displaying the cheque before sports writers Monday in his office, the state Commissioner for sports, Mr. Joseph Udedi, said  “sometime in May this year before the word cup, the Sports Minister invited our governor to Russia 2018 world cup fund raising event in Abuja, during which he made a pledge of 5 milion, and that is what we are  redeeming today.

“We want to let Nigerians  and the world know that governor Ugwuanyi is a sports lover and promise keeper” Udedi sated.

He said even though the Super Eagles crashed out of the world cup at the early stage, the governor wants to support and  encourage them, “because they can still win laurels tomorrow

According to the commissioner, Governor Ugwuanyi takes issues concerning sports very seriously, “and that is why he has been giving Rangers FC all the needed supports.

He hinted that the state government was currently up to date in the payment of players and management salaries and allowances, including match bonuses.

Udedi disclosed that as part of measure to make the club more vibrant and result oriented , the state government has acquired a modern physiotherapy center that would soon be installed for the club.