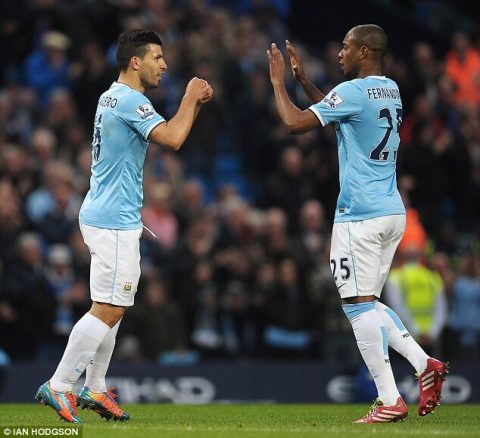 While Aguero was banned for four matches, his team mate was sanctioned for three games.

The latest ban makes it the second dismissal earned by 28-year-old Aguero in the current season.

The Man City striker was sent off for a high and late challenge on Chelsea defender David Luiz in Saturday’s 3-1home loss.

The Argentina forward’s previous dismissal was in August, when he received a retrospective red card for a challenge on West Ham’s Winston Reid.

With the latest development, Aguero will miss City’s games against Leicester, Watford, Arsenal and Hull.

Fernandinho was sent off after he clashed with Cesc Fabregas in the scuffle that followed Aguero’s lunge.

After the game, City Manager Pep Guardiola apologized for his players’ behaviour yet, said: “I don’t think Aguero’s challenge is intentional.”