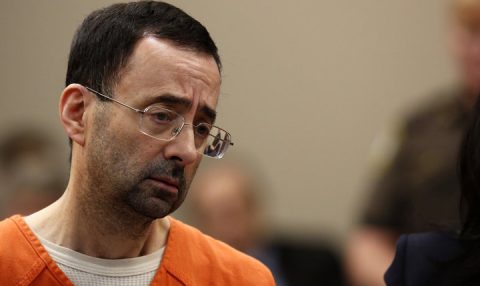 The ruling by Justice Rosemarie Aqualina was given after taking testimonies from about 160 of his victims.

Justice Aqualina dismissed Nassar’s statement as insincere as he attempted to apologize to the court.

The 54-years-old convict pleaded guilty to multiple counts including sexual assault against girls and young women, including Olympians.

The judge held there would “be in darkness the rest of his life.”

She held further that she would not send her dogs to the former sports doctor, adding: “I’ve just signed your death warrant”.

Following seven days of emotional testimony from Nassar’s alleged victims; the convict was given an opportunity to address his accusers in court.

“What I am feeling pales in comparison to the pain, trauma, and emotional destruction that all of you are feeling.

“There are no words to describe the depth and breadth of how sorry I am for what has occurred.” Nassar added.