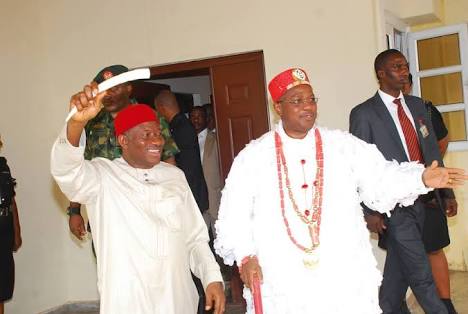 Traditional rulers in the South- Eastern Nigeria, have advised their dethroned Chairman, Eze Cletus Ilomuanya to toe the line of honour and stop parading himself as the chairman

It would be recalled that the Imo State Government, in 2014 ousted Eze Ilomuanya, who was then the traditional ruler of Obinugwu Autonomous Community in Orlu council Area of the State as well as Chairman of the Imo and South east Traditional Rulers Council.

The former Monarch was removed over alleged misconduct and involvement in partisan politics.

The Imo State Government had then justified that the dethronement was done in accordance with the Sections 11 and 14 of the Imo State Traditional Rulers Autonomous Com­munities Law No 6 of 2006.

After his sack, Governor Rochas Okorocha appointed the traditional ruler of Obi Orodo, Eze Samuel Ohiri, as Chairman of the State’s Council of Traditional Rulers, a development that automatically qualifies him as Chairman, for the South east.

Dissatisfied with his dethronement, Ilomuanya, went to court to challenge his removal. The suit is still pending in court.

Just recently, a paid advertorial signed by the Imo State Chairman of the All Progressive Congress, (APC) Dr. Hilary Eke, was published in one of the Nigerian national dailies, reminding members of the public that Eze Ilomuanya, remain dethroned as South East Chairman of Traditional Rulers Council, as well as that he has been replaced with Eze l Ohiri.

Meanwhile, in a communique issued at the end of their meeting in Enugu, the South east traditional rulers, urged deposed Eze Ilomuanya, to stop parading himself as their Chairman, insisting that Eze Ohiri, remains their new Chairman.

Unhappy with the development, the embattled monarch instituted a suit at the Enugu High Court against Eze Ohiri and other traditional rulers in the zone, insisting that he (Ilomuanya), remained the authentic Chairman of south – east traditional rulers council.

When the matter which is being presided over by the chief Judge of Enugu state, Justice Innocent Umezulike came up Thursday, counsel to the South-East Traditional Rulers, Barrister Anthony Ani informed the court that the two parties have decided to settle the matter out of court.

The case was later adjourned to December 2015.