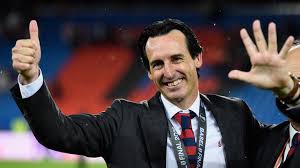 (AFRICAN EXAMINER) – Arsenal has confirmed Unai Emery confirmed as the club’s head coach. The confirmation of the 46-year-old was made by the Gunners’ Chief Executive, Ivan Gazidis.

Speaking on his past, Gazidis said: “Unai has an outstanding track record of success throughout his career; He has developed some of the best young talent in Europe and plays an exciting, progressive style of football that fits Arsenal perfectly.

The Gunners boss restated that Emery would lead the club into a new era following the departure of Wenger, 68, who won three Premier League titles and seven FA Cups – including two Doubles – with the club.

In his comment, Emery stated: “I’m very excited to be given the responsibility to start this important new chapter in Arsenal’s history.

“I am thrilled to be joining one of the great clubs in the game. Arsenal is known and loved throughout the world for its style of play, its commitment to young players, the fantastic stadium and the way the club is run.

“I’m excited about what we can do together, and I look forward to giving everyone who loves Arsenal some special moments and memories.”

Emery succeeds Arsene Wenger at Arsenal. The Frenchman left the club at the end of last season after 22 years in charge.