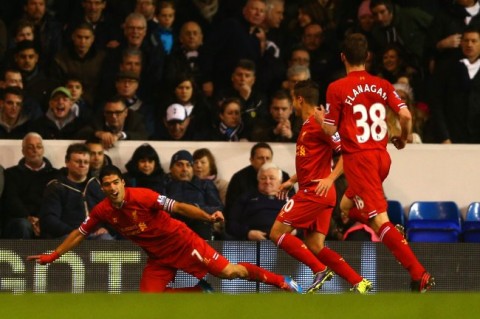 The Spurs boss says his side must bounce back after being humbled at home by Brendan Rodgers’ men and praised the visitors for a “spectacular” performance.

Andre Villas-Boas took responsibility for Tottenham’s poor performance as it was beaten 5-0 by Liverpool at White Hart Lane on Sunday. 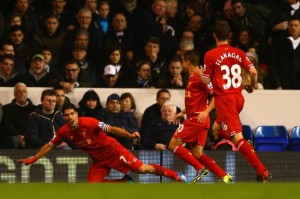 Suarez celebrates his first goal against spurs on Sunday

The hosts were easily beaten by a rampant Liverpool side, led by stand-in skipper Luis Suarez, but the Sprus manager rejected claims that his job could be on the line after Tottenham’s heaviest defeat at home in 16 years.

Suarez began the rout with an 18th-minute strike, Jordan Henderson and Jon Flanagan also finding the net before the Uruguayan grabbed his second – and 17th of the season – with six minutes to play.

There was still time for Raheem Sterling to add the fifth in the final minute to end a miserable day for Villas-Boas, with Spurs also seeing midfielder Paulinho sent off just after the hour.

“It was difficult for us, Liverpool were spectacular today,” he told Sky Sports. “I assume responsibility of the failure; we have to bounce back again. In the Premier League things are not going as we expected, as we wanted, so it’s normal that frustration is there from everybody.”

Though Villas-Boas took the beating upon himself, he also said he can’t do anything about rumors swirling about an impending firing.

“It’s not me that decides [my future]; I can only work to make things better,” he said. “I don’t have to convince anybody [to keep his job], our run is magnificent in the other competitions but not in the Premier League, that is the reality that we face because our slip ups at home haven’t allowed us to be in a better position.