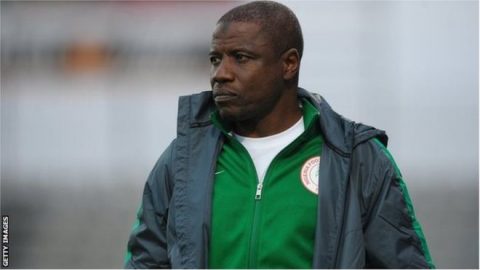 (AFRICAN EXAMINER) – Following last Sunday’s sack of Rangers FC of Enugu’s chief Coach, Benedict Ugwu and other members of the Technical crew over poor performance, Management of the club has engaged the current Assistant Coach of the Super Eagles, Salisu Yusuf, as the temporal Technical Adviser of the team.

African Examiner reports that Yusuf, was sent by the Nigeria football federation NFF, to assist Rangers in their domestic and continental engagement.

The Flying Antelopes and Enyimba FC of Aba, Abia state, South- East Nigeria, are the two clubs representing Nigeria in the ongoing 2019\2020 CAF Confederation cup and have qualified for the group stage.

Yusuf came with the immediate past coach of Delta Force Mbwas Mangut to take charge of the Enugu club side, which is currently occupying the 13th position in the Nigeria professional football league NPFL log, after losing their home and away matches for good three consecutive times.

Addressing the players at the Nnamdi Azikwe stadium Enugu, on Wednesday, Yusuf said that he was sent by the Nigeria Football Federation (NFF) to assist the team till further notice.

He said “I am here to assist the team and I believe that they have all it takes to rule the African nation. In fact, it was after the Sunday incident that NFF sent me because they are interested in Rangers and the continental league.

”NFF do not want Rangers to stop at this stage that is why they decided to send a capable hand,” adding that Rangers players are among the best legs the country can boast of at the moment.

”These players are good but they needed capable hand that can bring transition, understanding and communication in the team. what they need to do is to believe in themselves and with little changes in tactic.

”I am not coming to change things but to introduce some tactics and made the players believe in themselves,” Yusuf stated.

In his comment, Enugu state Commissioner for Youths and Sports Vitus Okechi said that Yusuf will stay with the team as long as the team last in the continental competition.

”That was why the NFF sent him because they are interested in the club and its CAF Confederation cup competition,”

The commissioner added that the players are all good but needed a sound technical adviser.

He said: “I believed that we are going to win Sunday match because Yusuf is a good coach and will bring out the best in the player.