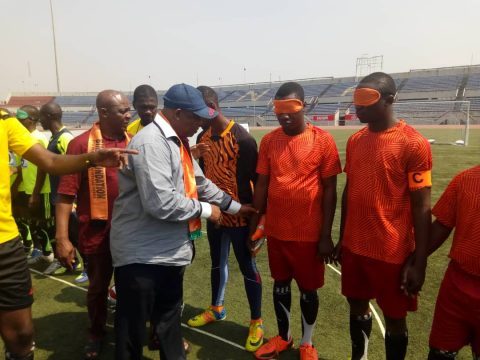 (AFRICAN EXAMINER) – No fewer than 10 nations, including Nigeria will be converging in Enugu, South- East, Nigeria, between November 22nd to December, 2nd 2019, in the qualifier to battle for the blind football sole African ticket ahead of the Paralympics games in Tokyo Japan 2020.

The blind football African championship qualifier, according to the organizers, will take place at the Nnamdi Azikiwe sports stadium, Enugu.

Disclosing this to Sports writers Thursday in Enugu, the South/East representative of Paralympic Committee of Nigeria (PCN), Barrister Sliver Ikpechukwu, “said that ten countries will be in Enugu to battle for the blind football sole African ticket to Olympic 2020.

He hinted that African nations have only one ticket to the Olympic in the said sports, adding that “Nigeria team known as “Star Eagles” will take part in the qualifying that will take place in Enugu from Nov. 22 till Dec. 2nd.

Ikpechukwu who was also the South, East representation of PCN and Para-Athletic Federation of Nigeria (PAFN) said governor Ifeanyi Ugwuanyi of Enugu state will perform the kick-off ceremony on 24th of November by 12 noon.

He explained that the choice of Enugu for the Championship and qualifier was made by the international Blind Sports Federation (IBSA).

”We are expecting countries like, Cameroun, Morocco, Ivory Coast, Senegal and Mali. Egypt, Cape Verde, Ghana, Zimbabwe and Nigeria,” saying the countries are expected to arrive on or before Nov. 22 as the opening ceremony and opening match of the qualifier will be on Nov. 24.

Ikpechukwu announced that only the opening day match will be played by 12 noon while other matches of the days will start by 9am daily.

According to him, the closing ceremony and the final match of the qualifier will be played on Dec. 1 while Dec. 2nd will be the departing day.

”This will be the first appearance of Nigeria blind football team known as Star Eagles in an international championship and qualifier for Olympic Games in Tokyo 2020.

As for the Star Eagles, I believed that they will qualify the country to its and ever blind football Olympic games.” Ikpechukwu stated.