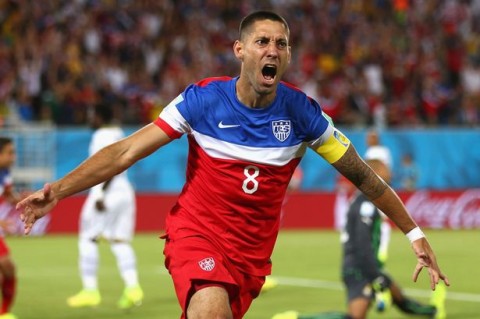 The two Group G foes have met in the previous two World Cups, with the Black Stars eliminating the US on both occasions, but the spoils fell to the Jurgen Klinsmann’s side in their opening World Cup game following late drama in Natal.

Andre Ayew thought he had rescued a point for the African side in the 82nd minute when he latched onto a Asamoah Gyan backheel in the penalty area and slotted past Tim Howard to cancel out Dempsey’s opener.

But the US were ahead again four minutes later thanks to a headed goal from half-time substitute John Brooks.

The US had conceded in the first five minutes in their previous two World Cup opening games, but got off to the perfect start in Natal when Clint Dempsey netted after 29 seconds.

The former Spurs man received the ball from Jermaine Jones, who had linked up well on the break with DaMarcus Beasley, jinked past a defender and then stroked to ball into the far corner, seeing his shot go in off the post.

Klinsmann’s side suffered a blow after 22 minutes when Jozy Altidore went down clutching a hamstring after chasing the ball on the left-hand flank. The Sunderland man had to be strethered off and was replaced by Aron Johannsson.

Dempsey himself was also in the wars, receiving a boot in the face, courtesy of John Boye. The American skipper was patched up and returned to the action soonafter.

Chelsea midfielder Christian Atsu was guilty of missing a host of long-range chances, as was former Sunderland striker Asamoah Gyan up front, as the African side pressed for an equaliser in the second half, but were ultimately made to pay for their profligacy in front of goal.