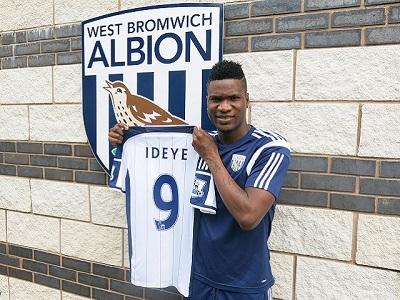 West Brom have shattered their transfer record with the £10m signing of out of favour Super Eagles striker Brown Ideye.

The Dynamo Kiev player held talks with the Baggies Friday and has sealed a deal worth an initial £9m with a further £1m to come in add-ons.Ideye penned a three-year deal with a further year’s option if the Baggies still want him. 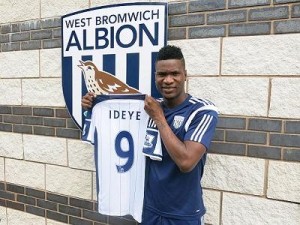 Head coach Alan Irvine said: “Brown is a quality striker and I’m looking forward to working with him.

“He’s a strong, quick, powerful player who likes to get in behind defences and has plenty of Champions League and international experience.”

“Brown is a quality striker and I’m looking forward to working with him”. Alan Irvine said.

Ideye has scored 33 goals in 74 matches for the Ukrainian side and other former sides include Sochaux in France and Neuchatel Xamax in Switzerland.

Capped 23 times by the Super Eagles with five goals, he was part of Nigeria’s African Nations-winning squad last year but did not travel to Brazil for the World Cup.

The fee will eclipse the £6m spent on Stephane Sessegnon last year in what is a statement of intent from the Midlands club after their narrow escape from relegation.

Ideye will link up with his new team mates when they return from their pre-season training camp in the United States.