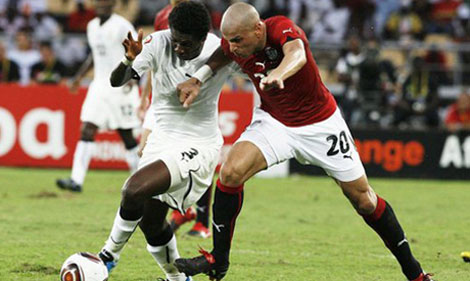 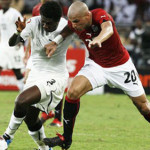 Ghana put one foot in the 2014 FIFA World Cup Brazil with an emphatic 6-1 victory over Egypt in the first leg of their qualification play-off in Kumasi.

The hosts dominated from the outset at Baba Yara Stadium and deservedly took the lead inside five minutes through captain Asamoah Gyan. Wael Gomaa’s own goal doubled the lead, before Mohamed Aboutrika’s penalty four minutes before the interval gave the Pharaohs hope. 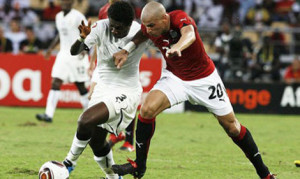 Yet that hope was extinguished almost immediately as Majeed Waris made it 3-1 at half-time, while a second for Gyan, a Sulley Muntari penalty and a wonderful late Christian Atsu strike wrapped up the scoring in the second period.

Ghana laid siege to the Egypt goal from the first whistle with visiting goalkeeper Sherif Ekramy getting involved early on, including picking up an injury that would eventually force him off after the break. The ailing Ekramy was in the firing line again in the fifth minute as Ghana went ahead, Waris unlocking theEgypt defence with a flick around the corner for Gyan who ran on before firing a shot in via the far post.

The one-way traffic continued and on 22 minutes it was 2-0 when Michael Essien was allowed to slalom into the Egypt penalty area. The Chelsea midfielder looked as though he had overdone his run when he was held up on the edge of the six-yard box by a combination of goalkeeper and defender, but earned a slice of luck when Gomaa ran in to challenge and deflected the ball into his own net.

Egypt should have had a goal back in the 34th minute when Aboutrika’s excellent free-kick found Mohamed Naguib unmarked a yard from the line at the far post but the defender could only head wastefully over the bar.

The visitors had a lifeline with five minutes left in the half when Rashid Sumaila needlessly barged into the back of Mohamed Salah inside the area to concede a penalty, which Aboutrika coolly slotted home.

But the hosts soon restored their two-goal cushion as Waris climbed highest to nod home a Muntari free-kick a minute before the break.

The action refused to let up and eight minutes after the restart Ghana had their fourth as Muntari saw his athletic bicycle kick bounce up invitingly into the six-yard box where Gyan showed good strength to nod past Ekramy.

Egypt’s woes continued when they lost Ekramy to his earlier injury, with Ahmed Elshenawi coming on in his place, but with 20 minutes remaining the replacement was in trouble when he rushed from his line to challenge Waris but succeeded only in conceding a penalty.

With Gyan on a hat-trick the captain would perhaps have been tempted to pull rank and take the spot-kick for himself, but instead it was Muntari who stepped up to send the keeper the wrong way.

There was still time for substitute Atsu to make an eye-catching contribution just moments after coming on in the 83rd minute, running at the beleaguered Pharaohs backline and firing a powerful low shot in off a post to give his side a seemingly unassailable advantage heading into the return leg.