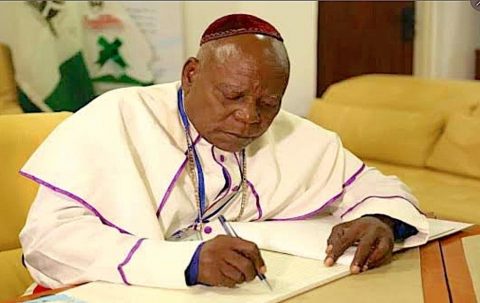 (AFRICAN EXAMINER) – The Chairman, Christian Association of Nigeria (CAN), Nasarawa state chapter, Bishop Joseph Masin, who was abducted by gunmen on Thursday in Lafia has regained his freedom.

Mr Bola Longe, Commissioner of Police (CP) in the state confirmed the release of the CAN chairman to newsmen on Sunday in Lafia.

Longe said that four suspects have been arrested in connection with the abduction and that investigation was ongoing to arrest all those involved.

He, however, denied knowledge of any ransom being paid to secure the release of the CAN chairman.

The CP added that all the suspects would be charged to court for prosecution as soon as investigation was concluded.

Corroborating the release, Pastor Sam Joseph, son of the CAN Chairman told newsmen that his father regained his freedom at about 11:45 p.m. on Saturday, around Lizhi village in Nasarawa-Eggon Local Government Area of the state.

He said the bishop, however, arrived his Bukan-sidi residence in Lafia at about 2:00 a.m on Sunday and had been taken for medical examination in an undisclosed hospital.

The state CAN Chairman, who is also the Bishop and General-Overseer of World of God Worldwide Gospel City, was abducted by gunmen from his residence in Lafia on May 28, and taken away on a motorcycle according to family source.

The abductors later contacted the family and demanded a N20 million ransom for his release.