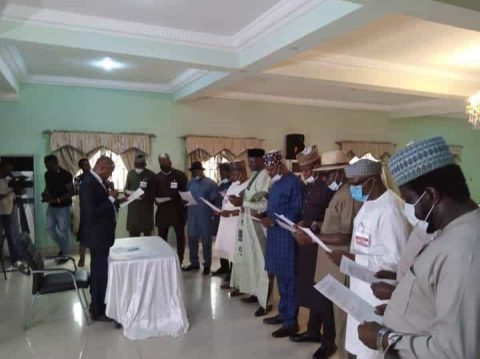 (AFRICAN EXAMINER) – The crisis rocking the Edo State House of Assembly Thursday escalated as 17 lawmakers in the state have inaugurated and elected a parallel speaker.

African Examiner gathered that 14 members who had refused to be inaugurated are loyalists of the immediate past national chairman of the ruling All Progressives Congress (APC), Comrade Adams Oshiomhole and staunch supporters of the party’s candidate, Pastor Osagie Ize-Iyamu.

They were joined by three lawmakers who had earlier been inaugurated.

The inauguration which was held at an undisclosed venue, saw a former Speaker of the Assembly, Hon. Victor Edoror, emerging Speaker, after a motion for the impeachment of Frank Okiye, the incumbent Speaker loyal to Governor Godwin Obaseki  was not opposed.

Before the election, 12 out of the 14 members who were not sworn last year took their oaths administered by a former Clerk of Edo Assembly, Tom Efezokhae.

When contacted for reaction, the Clerk of Edo Assembly, Mr. CYaya Omogbai said; “I don’t talk to press, meet my PRO please.”

It would be recall that Speaker of Edo Assembly, Frank Okiye, had recently raised the alarm over planned hijack of the Assembly complex.