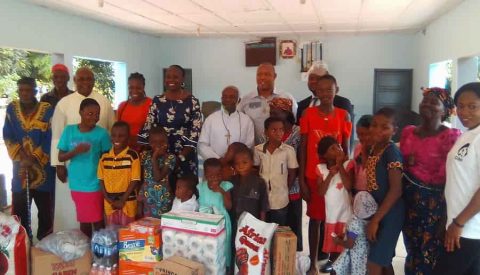 (AFRICAN EXAMINER) – Cured lepers, including a 103 years old man, Samuel Aneke, currently undergoing rehabilitation at the Umuchigbo, Iji-Nike  Centre for the disabled, Enugu, have appealed to  government at levels, and private spirited individuals to always come to their assistance.

Besides, they expressed displeasure with the state governor, Ifeanyi Ugwuanyi, for neglecting them and failing to fulfill the promises he made to them when he visited their Center to canvass for vote ahead of the last general election.

Mr. Aneke, and his other aged colleagues, who are in their 80s and 90s, had lashed out at governor Ugwuanyi, for neglecting them after using their votes to win election and assume office.

The Ex- Centenarian leprosy  disease sufferer, who hails from Akpugo, in Nkanu East council area of Enugu state, South- East Nigeria, is among the 13 families treated after evacuation from the Oji River leprosy Camp by a religious group, the ‘Marist Brothers.

The former lepers are undergoing rehabilitation at the Umuchigbo, Iji Nike Center for the disabled, Enugu, owned and managed by the Marist Brothers, an International Roman Catholic Congregation with bias on promotion of youth education and socio works across the globe, especially among the less privileged and people with disabilities.

Aneke, who is still physically strong despite his age, spoke in Igbo language on behalf of his Colleagues when an Enugu based Nongovernmental organization (NGO), Genuine Womanhood Initiative visited inmates at the Centre with assorted gift items, including food, drinks, Clothing, detergents, amongst others.

He said it is quite unfortunate and unbelievable that governor Ugwuanyi, could neglect and forget about the Ex-lepers, the way he did, even when they contributed to his election success stories.

Aneke explained how governor Ugwuanyi came to the rehabilitation home ahead of the general elections, to canvass for their votes and made promises of brining succor to them when he wins.

According to him, the most annoying thing to them is that same governor frequents the Rev. Fr. Ejike Mbaka’s Adoration Ministry, which is just a stone throw from their Centre, and has refused looking towards their direction.

While raining prayers on the NGO, led by its Executive Director, Lady Jane Ndukwe, for the generosity and love shown them, even when most people are still stigmatizing against them, he appealed to other organizations, be it government or private, and spirited individuals to always come to their assistance.

He posited that if not for God, and the Marist Brothers intervention, most of them still alive would have long died and be buried due to hardship and other challenges associated with people of their status.

Presenting the gift items to the handlers of the rehabilitation home, Lady Ndukwe, accompanied by some top officials of the NGO, said they came to identify with the former lepers, by showing them love which is the hallmark of a true Christian.

She explained that the main aim of establishing her organization is to promote Womanhood which is the partway to nation building, as well as restore value system which had been lacking in the contemporary society, including Enugu state.

Lady Ndukwe said: “as true Christian, we must always imbibe the spirit of showing  love to one another at all times, including the less privileged , those in pains, and those with all forms of disabilities, because this is the golden rule by God himself .

“So, we have come here today to say that we love you all, and that God loves you too, no matter your condition and what you people are passing  through in life.

The Genuine Womanhood Initiative boss,  equally told the former lepers that though, the items “we brought for you may not be huge, but what matters is that it came from the deepest of our heart, and is all about showing love to one another” she stated.

“We have  also come to show that God’s admonition of you must love one another, you must be your brother’s keeper, So, don’t lose hope, God is your strength, always make prayers your watch word.

Rev. Osuji, who is also a senior Lecturer at the Enugu Catholic Diocese owned Godfrey Okoye University, disclosed that the Roman Catholic Marist  international Congregation was founded in 1817, with headquarters in Rome, and operates in 87 countries of the world, including Nigeria.

He said aside propagation of God’s Gospel, the religious group which is touching lives under the Catholic mission, is at the forefront of  promoting Christian youth education and carrying out Socio works across the world, including taking care of the aged, less privileged, and physically challenged persons in the society