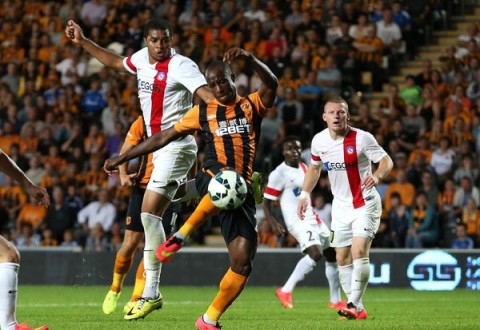 Super sub Sone Aluko struck a late winner to give Hull City their first ever win in Europe.

The out of favour Super Eagles striker’s volley ten minutes from time spared Steve Bruce’s blushes against Slovakian side AS Trencin. 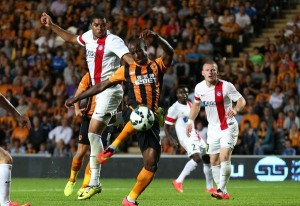 Trencin took a shock lead after 91 seconds through Tomas Malec but Ahmed Elmohamady levelled with Hull’s first ever goal in Europe midway through the first half.

Bruce then sent on Aluko as a late sub to win it.

Hull were held to a goalless draw in Zilina seven days earlier but they really should have taken the lead in that game.

Tom Huddlestone had a penalty saved before somehow smacking the rebound off the bar from three yards.

Bruce opted to freshen up his team by giving Robert Snodgrass his first competitive start as one of three changes to the line-up. Yannick Sagbo, Robbie Brady also came in as Sone Aluko, Liam Rosenior and David Meyler made way.

Hull were on their way out on away goals as Tom Ince and Aluko were sent on to rescue the situation.

Aluko did the business when he volleyed in from Snodgrass’s header across goal after Elmohamady’s cross – his first goal in 11 months.

Steve Bruce could have been left blushing had Aluko not scored 10 mins from time.