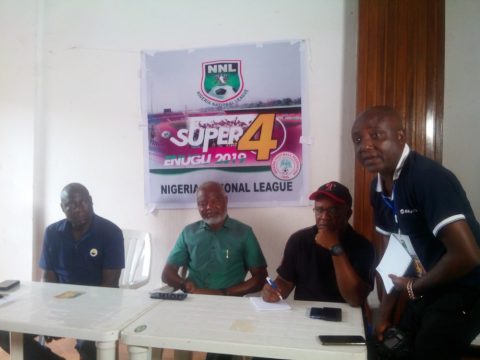 (AFRICAN EXAMINER) – All is now set for the 2019  finals of the Super 4 competition of the Nigerian National League (NNL) at the Nnamdi Azikiwe stadium  in Enugu, South East Nigeria.

Addressing a press conference Friday at the Nnamdi Azikiwe stadium ahead of the tournament , Chairman of NNL, Hon. Chidi Offo Okenwa, charged the participating club sides  to play according to football rules and regulations, expressing delight that the four clubs had done well to reach “this level.

The chairman urged the teams to observe the rules and regulations to the latter as good ambassador of NNL, adding that  the tournament was to liberate and repackaged the four teams for the apex league.

According to him, “we are organising this tournament to liberate and to repackage the four teams that qualified for the Nigeria Professional Football League (NPFL) all this is to ensure they do not drop back in as much as we are going to miss them next season. They ought to beat the drop to show the strength of NNL.

He further  hinted that there will be a curtain raiser match between Gburugburu U10 boys and Grassroots Managers Association U10 before the first match of the day.

Okenwa who is also a board member of the Nigeria football federation and chairman Enugu state football Association,  said that the teams had been given the tips of how NPFL looks like and that he has the confidence that they will surmount the task when the league begins .

Also speaking during the briefing, NNL chief operations  officer Lawrence Katka said that the teams have been paired for the matches.

He said that the two northern conference teams will face each other while the two Southern teams with do battle in the second match of the day. This tournament has only four teams and it will start from the semifinal stage as the first match will be between Adamawa United FC and Jigawa Golden Stars FC.the  second match of the day will be between, Akwa Starlet FC and Warri Wolves FC.

The Operating officer added that “on Sunday, the losers will face each other in the third place match as the final would be between the match day winners, he revealed.