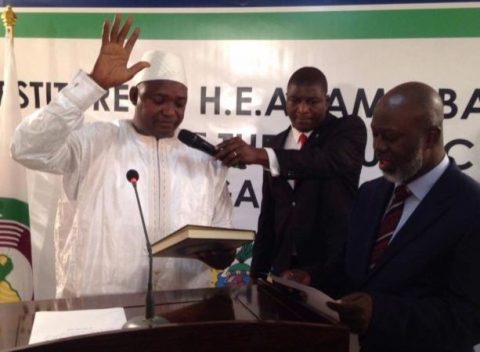 (AFRICAN EXAMINER) – Gambia’s President Adama Barrow has taken the oath of office in neighbouring Senegal, while the country’s longtime ruler Yahya Jammeh has refused to step down.

Barrow, the winner of  December 1 election, was inaugurated on Thursday at Gambia’s embassy in the Senegalese capital, Dakar.

Yahya Jammeh, the repressive leader of Gambia who seized power in a coup 22 years ago and once said he could rule for a billion years, is refusing to step down after losing the presidential election last month.

In his inauguration speech, Barrow called on ECOWAS, the African Union and United Nations to “support the government and people of the Gambia in enforcing their will”.

A military operation is highly likely to be used to force Mr Jammeh out of office so the new president, Adama Barrow can return home to serve his term.

Already troops from Senegal, Nigeria, Ghana, Togo and Mali are said to have massed at Senegal/Gambia border waiting to move in to remove Mr Jammeh.