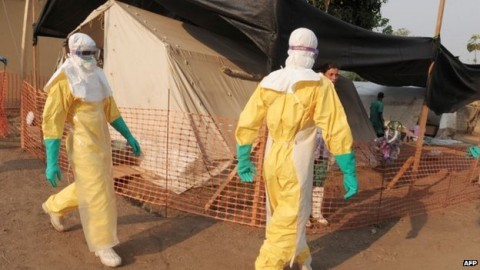 As part of precautionary measures to check the deadly Ebola virus, the Catholic Diocese of Enugu on Sunday banned indefinitely, shaking of hands during (mass) church service.

Hand shake during mass is an aged long tradition of the Catholic church across the globe.

In line with the Roman Catholic doctrine, while mass lasts, the officiating Priest, (Rev. Father), is expected to pause at a point and asks every one in the church to embrace or have a hand shake with each other, as a way of “showing love and peace”

As one of the churches with large membership in Enugu, the leadership of the Church African Examiner gathered from a parishioner in Enugu that Catholic was always mindful of any issue relating to life.

In line with its new resolve, the Bishop of the Diocese, Rt. Rev (Dr) Calistus Onaga, had directed all the Parish Priests to replicate the same measure in their domains during service till further notice.

He maintained that the decision was part of effort to check the outbreak of deadly Ebola virus which is being speculated to have spread in the state.

Bishop Onaga, added that precaution was necessary as medical experts have confirmed the disease, could be contracted via hand shake or bodily fluid mixture of the infected victim.

Some parishioners of St. Mary,s Catholic church, Uwani, Enugu, who spoke to African Examiner on the issue, hailed the approach, especially as they observed it was aimed at safeguarding the lives of people.

They also appealed to the World Health organisation (WHO), and other relevant global Health institutions to double their efforts in coming out with a vaccine for the cure of the disease.

It would be recalled that African Examiner reported barley two months ago, the Diocese’s ban on women from using hand bags while coming for any church service to checkmate the antics of impersonating Boko Haram agents.