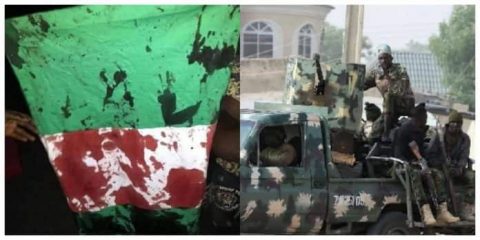 (AFRICAN EXAMINER) – Worried by the level of destructions visited on innocent Nigerians, public facilities and businesses in the country by miscreants that hijacked the #EndSAR protests, the Police Service Commission (PSC) has called for restraint.

The commission warned that any attempt to force the country into a state of lawlessness will be an ill wind that will blow nobody any good.

The PSC said it has followed recent developments and it is shocked at the brazen manner with which miscreants have taken advantage of the #End SARS protests to unleash terror and havoc across the country.

The commission in statement on Friday by its Head, Press and Public Relations, Ikechukwu Ani also condemned the unprovoked killing of Police men and women across the country and the burning of Police stations, stressing that the action was barbaric and unfortunate.

The statement noted that Police Officers are also Nigerians that have sacrificed their lives and comfort for the safety of the citizens and their properties and deserves nothing but commendation, support and encouragement.

It further reiterated the commission’s  commitment to holding  Police Officers, whether of the defunct Special Anti Robbery Squad (SARS) or conventional, accountable for their actions and inactions and will continue to ensure instant due punishments for misconducts.

“The Commission only recently dismissed ten senior Police Officers including an Assistant Commissioner of Police and reduced the rank of nine others following established cases of misconduct.

“The Commission will process and punish all Policemen found culpable by the Presidential Panel on Reform of the defunct SARS. The Panel had concluded its assignment in 2018 but submitted its Report to the Commission on Friday, 16th October 2020”, the statement said.

The statement also disclosed that the PSC is still awaiting the white paper on the Report from the National Human Rights Commission so as to quicken its disciplinary mechanism and ensure that those to be dismissed are immediately flushed out from the system.

“We will ensure that the Police that will emerge in the nearest future will meet the expectations of Nigerians. Nigerians are therefore urged to extend to them the required cooperation and support while Government attends to the basic inadequacies facing the Institution”, it added.

“The commission’s directive was contained in a letter to the IGP signed by the Chairman of the Commission, Musiliu Smith, a retired Inspector General of Police and dated October 20th, 2020”, the further explained.