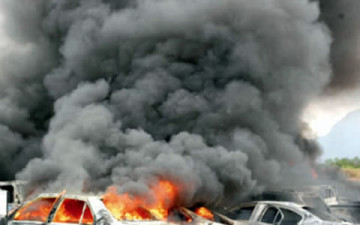 The explosion was suspected to be caused by bomb blast.

The blast according to the Tribune occurred in the early hours of Saturday and cut off the ever busy Akure /Owo road.

Many people were reportedly injured during the explosion.

The blast happened less than a kilometer to Akure Airport. It was learnt that it affected many residents of Eleyowo community, having destroyed a church and a school.

While done residents who lived within the church premises were said to be injured, some were rescued by the Samaritans.

A school with boarding facilities was said to be destroyed beyond repair with roofs of all the buildings blown off.

The incident impeded both intra and inter vehicular movement.

The cause of the blast was similar to the recent Abule Ado, a Lagos suburb fatal explosion where over 20 lives were lost, and many houses were destroyed.