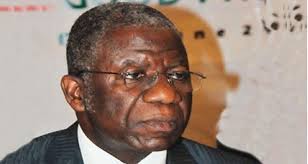 BALTIMORE, MD (AFRICAN EXAMINER) – Justice Gabriel Kolawole of the Federal High Court, Abuja, has adjourned the trial of a former Head of Service, HoS, Stephen Oronsaye, who is being prosecuted by the Economic and Financial Crimes Commission, EFCC, for a N2 billion fraud to November 25, 2015.

This followed the amendment of the 24 count charge earlier preferred against the accused persons by the EFCC.

It was gathered that further investigation into the fraud had necessitated a need to amend the 24-count charge initially brought against Oronsaye, on July 13, 2015, in which along with his co-accused, Osarenkhoe Afe, and Fredrick Hamilton Global Services Limited, he is alleged to have been complicit in several biometric contract awards during his tenure as HoS.

At the resumed sitting on November 3, 2015, prosecuting counsel, Adebisi Adeniyi, told the court that three additional defendants that are corporate bodies had been included.

“We attempted to serve Cluster Logistic Limited with the amended charges, but observed that the address at the location of the head office did not correspond with the particulars we had,” he said.

He further told the court that efforts were being made to get the charges across to the company and the other two defendants.

He therefore requested the court for a new date, in order for the accused persons to be served.

Justice Kolawole in acceding to his request adjourned till November 25, 2015.

In one of the counts in the amended charge dated November 2, 2015, Oronsaye is alleged to have in connivance with Abdulrasheed Abdullahi Maina (now at large), Osarenkhoe Afe and Fredrick Hamilton Global Services Limited in July 2010 “collaborated in disguising genuine nature of the sum of N161,472,000 derived from an illegal act to wit conducting procurement fraud by means of fraudulent and corrupt act on the contract extension of biometric enrolment purportedly awarded to Innovative Solutions Limited by the Office of the Head of Service of the Federation, without following due process, an offence punishable under Section 14 (1) (b) of the Money Laundering (Prohibition) Act, 2004”.