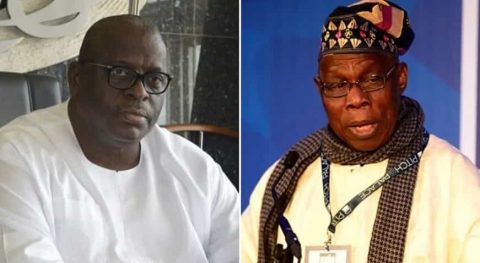 In his condolence letter dated August 8 and addressed to the Ogun governor, Prince Dapo Abiodun, Obasanjo described the life and history of Kashamu as “a journey that should offer lessons for those of all us on this side of the veil.”

He writes further: “Senator Esho Jinadu (Buruji Kashamu) in his lifetime used the manoeuver of law and politics to escape from facing justice on alleged criminal offence in Nigeria and outside Nigeria.

“But no legal, political, cultural, social or even medical manoeuvre could stop the cold hand of death when the Creator of all of us decides that the time is up.

“May Allah forgive his sins and accept his soul into Aljanah, and may God grant his family and friends to bear the irreparable loss.”

During his lifetime, Late Buruji Kashamu and ex-president Olusegun Obasanjo have involved in damaging and mudslinging political fights.

In 2014, Kashamu sued Obasanjo N20 billion for libel saying some parts of his book “My Watch” referred to him as a criminal, drug dealer and a wanted fugitive in UK and America.

The Judge ordered Obasanjo to desist from further publishing, printing or offering for sale the controversial book.

In several interviews, late Kashamu had referred to Obasanjo as a corrupt politician alleging that he used political office to enrich himself, telling him to stop preaching integrity and morality.

2 Comments for “Obasanjo Mocks Kashamu, Says He Used Law, Politics to Escape Justice, But Not Death”