[OPINION] Governor Ugwuanyi’s Giant Strides in The Judiciary: A Glimmer Of Hope 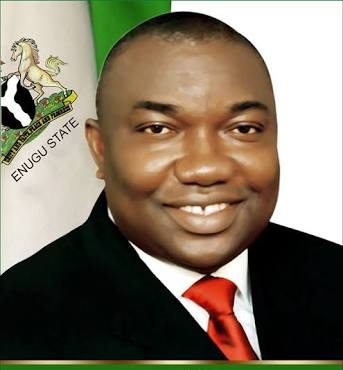 [AFRICAN EXAMINER] – Saddled with weak institutions oftentimes tied to conflicting functions, Nigeria’s prospects at major fronts have languished in perennial cycle of only potentiality. Why has a hugely endowed Country with both human and material resources so retrogressed while its peers climb into quantum leaps on the ladder of socio-economic progress?

Despite elaborate outlines of the constitution and other key regulations, manipulating the formal state institutions, ignoring court order and upending the due process are the well known art of the Nigerian political class and other key players in the country’s public life. Institutions largely function as mere facades, for which nocturnal and primordial interests essentially manipulate to realise goals of ethnic hegemony, primitive accumulation of wealth and other sundry perverse goals that are not expressly or impliedly outlined in the constitution or any other regulatory framework.

Sequel to the fact that the frameworks of formal state institutions are mostly farcical, they are unable to inspire or mobilize the latent human resource of the huge population into a national asset to prosecute the agenda of sustainable and inclusive economic development. Elite consensus on political accommodation and method of leadership recruitment to public institutions has ensured that the process produces mediocrity, depriving the country the services of her best materials.

The structural enablers of corruption are the weak state institutions and fighting corruption without first tinkering with its underlying infrastructure is basically a public relations stunt without any possibility of institutional entrenchment. More worrisome than the missed opportunities is the fact that the Nigerian power elite has neither reckoned nor felt ashamed that they are punching far below the country’s potential and manifest destinies.

The Judiciary as the third organ of the government is the pillar of political democratic governance, saddled with the cardinal responsibility of adjudication, and interpretation of the law in line with the doctrine of Separation of Powers. From the citizens’ perspective, the judiciary is prime among the tripod of democracy because it functions as their protector against the possible excesses of the other arms and therefore ought to be tenaciously shielded or insulated in the maze of the prevailing incongruities. It is the beacon of justice, egalitarianism and hence the guardian of the soul of society. Political corruption and its associated malfeasances, and societal ills can only thrive on the nourishing humus of a judiciary infected with chronic debauchery and/or uttermost incompetence.

Andrew Jackson, the American soldier and statesman who served as the seventh president of the United States from 1829 to 1837 succinctly captured the great import of the Judiciary’s mantle when he posited that “all the rights secured to the citizens under the Constitution are worth nothing, and a mere bubble, except guaranteed to them by an independent and virtuous Judiciary.

”From the priests of the _Ius Civile_ in the Archaic Roman Law (650–264 BC) to Henry II’s jury of 12 local knights (1154-1189), the primer of the modern justice system in England, to the present era, the Judiciary has remained imperative to the birth, sustenance and evolution of democracy.

Unfortunately, the judiciary in Nigeria is afflicted with political cankerworms threatening its sanctity and desecrating its hallowed integrity. The most vicious are often the theatricals between the executive arm of government and the Judiciary across federal and state levels; usually stemming from illegal interference and assumption of prerogative by the former over judicial matters.

The polity is awash with stories of how the judiciary had been shackled, its courts shut down; and that of a bleak time, when grim security operatives invaded the residences of Supreme Court judges in the dead of the night.

Hence, it is safe if not apt to say that the constitutionally touted independence of the Nigerian Judiciary remains by a disquieting degree, cosmetic, utopian and a mirage. When the judiciary is robbed of its independence, the doctrine of Separation of Powers is flushed down the toilet of impunity. Consequently, political structures lie decrepit, institutions falter and the ordinary masses suffer the mess created by a few feudal Lords of the Manor.

The absence of financial independence for the Judiciary has often led to manipulation of this vital arm of government, both at the federal and state levels. This is why the Executive Order No.10(EO 10) 2020, recently signed into Law by President Muhammadu Buhari for the implementation of the financial autonomy for state Judiciary in line with powers vested on him under Section 5 of the 1999 Constitution (as amended) must be commended.

The section extends to the Executive and maintenance of the constitution, laws made by the National Assembly, including but not limited to Section 121(3) of the Constitution which guarantees financial autonomy of the state Judiciary. Section 77(a) of the Executive Order makes provision for a Presidential Implementation Committee to ensure compliance.

Therefore, the Executive Order 10 makes it compulsory for the 36 states to include the allocations of the Judiciary in the first-line charge of their budgets. Besides, Article 6(1) of the Order provides that “not withstanding the provisions of the Order, in the three years of its implementation, there shall be special capital allocations for the Judiciary to undertake capital development of the state Judiciary Complex, High Court of Appeal and other court complexes befitting the status of a Court.”

We must therefore celebrate leaders in the executive arm of government in Nigeria, who unlike their overstepping predecessors and counterparts, respect the Judiciary and support its independence and operational efficiency.

It is at this point that the name of the Executive Governor of Enugu State, His Excellency Rt. Hon. Ifeanyi Ugwuanyi resonates with this commendable renaissance. The Governor, a famed apostle of democratic tenets, in his usual clairvoyance has been a copper-bottomed fortress and advocate of justice and fairness.

This explains why social justice is firmly integrated in his governance agenda geared towards realizing the visions of our founding fathers and equitably delivering the dividends of democracy to his people. It is undisputable that social justice flows from the estuary of judicial activities even more than from the firth of religious crusades.

Unlike many political leaders of the days of yore and a few of the present, Governor Ugwuanyi is vitalized, rather than threatened by this esteemed place of the Judiciary as ‘checkers & balancers’, moral watchdog of the society and soldiers of conscience. Through inter-organ collaborations across various political fora and a conscious infrastructural rebirth, the governor has sufficiently lent his executive privileges to consolidating the independence and enhancing the productivity of the Judiciary in Enugu state.

Rt. Hon. Ugwuanyi’s achievements on the front of Judiciary reform since 2015 is hardly surprising for the impact of his stewardship in the Southeast capital reverberates across all facets of human endeavour. The Judiciary couldn’t have been left out of this revolutionary train for Governor Ugwuanyi acknowledges it as a partner in progressive leadership, an albatross of social inequality and injustice, and the final hope of the common man.

Perhaps, Governor Ugwuanyi’s stoical determination to promote the ideals of an independent judicial system, through zero interference and continued support for its self-regulation, is the poster child of his administration’s pro-Judiciary movement. Also screaming volumes are his infrastructural exploits which are crystallizing the emergence of an improved prototype of judicial system in Nigeria.*

The first ever Enugu State Customary Court of Appeal Headquarters complex was constructed by the Ugwuanyi administration and furnished with state-of-the-art facilities. Justice Zainab Adamu Bulkachuwa, the President of the Court of Appeal, on inspection of the architectural masterpiece, heartily commended the governor for his unfaltering resolve to reposition the state Judiciary.

On other vanguards of Judiciary reform, the governor constructed 34 modern Customary Courts and 14 new court buildings and open registries in the judicial divisions and magisterial districts across the state. He also undertook a massive renovation of the State Judiciary Headquarters complex and the former DAD Building which was consequently converted to the State Ministry of Justice Headquarters.

He established the Multi-Door Court House in Enugu and on June 12, 2020, commissioned a modern complex of eight Magistrate Court Halls and another complex of two High Court Halls with one Open Registry at Nsukka Judicial Division. These reecho Governor Ugwuanyi’s unquestionable desire for speedy, effective and efficient dispensation of justice, at the urban centres and the hinterlands.

Multi-Door Court for mediation has also been set up to achieve amicable and seamless resolutions of some cases without necessarily passing through the hurdle of litigation. Lawyers from the ministry of Justice are now constantly attached to courts to ensure steady representation and expedited judgements.

Encomiums deservedly need to be poured on the Bench, ably led by the Chief Judge of the State, Hon Justice N. P Emehelu, the Attorney General and Commissioner for Justice, Mr. Meletus Eze, and the Bar of Enugu chapter, for their resilience when put on trial.

Greed and avarice are always the banana peels whose predilection of recyclability remains a blight upon the majesty of our democracy. The role of Judges in a democracy is an enviable one and in fact sacred. Judges are like viceroy of God on earth.

While Judicial officers must essentially exhibit high degree of diligence, unquestionable competencies, uncompromising sense of discipline, an untainted level of probity, impeccable integrity, unscathed transparency and glaring incorruptibility; the Executive must never, in any circumstance, employ coercion in the guise of anti-corruption crusade against the Judiciary.

It’s axiomatic that the Bar is the major casualty of an attack on the Judiciary. Therefore, the battalion of the Bar must advance with a steadied resolve not to relent in performing its role as the “guardian angel” of the Independence of democracy. The Bar must fight with fervour and pursue with resilience the cause of justice without succumbing to intimidation. It’s only if the Bar and the Bench abdicate their utilitarian roles that the Judiciary can be realistically placed under siege.

Even as the most unscrupulous naysayers and hirelings will easily concede to Ugwuanyi’s glittering credentials in the Judicial sector, more efforts are still needed to firmly accentuate the arrival of his name in the Hall of fame.

Without prejudice to Covid-19 protocols, the newly recruited customary court chairmen and members will be very crucial in dispensing justice if sworn in as quickly as possible. Appointments of more High Court judges renowned for their dexterity and unwavering integrity, and the employment of stenographers highly skilled in transcription of speeches will provoke expeditious conclusions of cases if justice is to be served early.

Administration of Criminal Justice Law of Enugu State will be effectively implemented if Judges, Magistrates, Police and other institutional stakeholders in the administration of criminal justice system are properly trained and periodically retrained, while the members of the public are constantly sensitized on the provisions of the aforementioned Law.

If a monitoring committee is specifically set up by the Chief Judge for the implementation and enforcement of compliance of this Law (ACJL), it will definitely inspire the birthing of an improved image-narrative for the State, nay the Nation . The magistrates are enjoined to regularly pay visits to custodial centres (police cells, DSS, NDLEA, etc) to ensure that they are not in dehumanising conditions and to ascertain the reasons behind detentions as well as detect human rights abuses.

Towards consolidating social justice in Enugu State, closing chasms of inequality across the strata of society and fueling sustainable economic prosperity, Governor Ugwuanyi is instituting a new culture of accountability and transparency in governance; strengthening the state’s Judiciary via enabling environment for a sweeping reform and deploying our patrimony for common good. Posterity will judge him justly as a hero of democracy and one of the founding fathers of a modern Judicial system; trademarked with inalienable independence, robust infrastructure and an unflagging commitment to fairness, equity and good conscience.