Osinbajo: The Travails of a Vice President 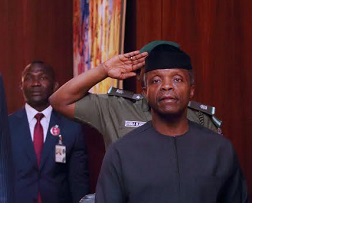 (AFRICAN EXAMINER) – This is not the best of times for the Vice President Professor Yemi Osinbajo. Since the beginning of Buhari’s second term in office, there has been speculations on whether the VP would continue to enjoy the sort of legroom he was allowed in the government during the regime’s first term in office, or whether that legroom would be constricted now that  the elections are over and he has presumably outlived his electoral usefulness. The speculations were recently oxygenated first by an announcement that the VP would henceforth seek presidential approvals in the running of the parastatals and agencies which are statutorily under him. This was quickly followed by other signposts such as the dissolution of the Economic Management Team headed by the VP and its replaced by a new Economic Advisory Council and the dissolution of the Special Presidential Investigation Panel set up by the VP when he was the Acting President.  On Tuesday, September 24, 2019, there was news that the Acting Chairman of the Economic and Financial Crimes Commission (EFCC) Ibrahim Magu claimed that there is corruption in the National Social Investment Programme (N-SIP), supervised by the Office of the Vice President.

There are several issues and lessons in the VP’s travails:

One, though  Osinbajo’s loyalists seem to have recently begun to push back on the damaging stories against him,  it is remarkable that the sort of anger expected from the VP’s core constituencies in the face of his travails has failed to materialize. Rather his core constituencies – the South-west, Christians, lawyers and  the Southern intelligentsia – appear to be driving the stories of his humiliation, with many exclaiming, “serves him right”. Even the forces that use former President Jonathan’s name as a symbol of their opposition to Buhari and everything he stands for, and whom one thought would have seen the alleged humiliation of the VP as another opportunity to come after Buhari, seem to be keeping their distance or even joining in criticising him. The idea that many  from the VP’s core constituencies seem to be asking him to carry his cross alone should be a wake-up call to him, if, or when this settles, for as the former Speaker of the United States House of Representatives Tip O’Neill would tell us, “all politics is local”. Osinbajo must really re-think the way he connects and relates with his base.

Two, there is inherently a sort of constitutional shackle to the office of the Vice President. For instance, though the VP runs on a joint ticket with the President, any Vice President is as powerful as the President wants him to be.  Again, largely because the position is a heartbeat away from the main thing, the occupant of is seen as the second most powerful person in the country but at the same time usually held in deep suspicion by the President and his associates.  In the case of Vice President Osinbajo, there are several core constituencies that have conflicting expectations of him: while the President and those around him expect unalloyed loyalty, (such that will convince them that he has no ambition of supplanting the President or secretly plotting to take over from him), his Christian constituency expects him to align with them in their allegations of a hidden plan by the government to Islamize and Fulanize the country. This essentially means that Osinbajo’s defence of Buhari in that regard, will not sit well with many people in that constituency.  Again while his fellow Yoruba, who have been in the vanguard of the restructuring agitations in this country in its various incarnations – from sovereign national conference to national conference to restructuring – expect him to be a powerful voice in the presidency in support of their clamour, Osinbajo’s position that he does not believe in’ ‘geographic restructuring’ certainly did not win him many friends from the region. In the same vein, lawyers and Southern intelligentsia expected him to join in the condemnation of the way Walter Onnoghen was treated but his voice was nowhere to be heard. Again when there was a generalized condemnation of RUGA in most parts of the South, the VP’s voice was muffled. Of course if Osinbajo has any contrary position to his public positions on these issues, we would never know as he is bound by the doctrine of collective responsibility to defend the government’s position on any issue. I believe he was right to do so.  Osinbajo probably had learnt lessons from Deputy Governors who tried to openly differ with their Governors. Virtually all lost out in the ensuing power game.

Three, while some of the disappointments from Osinbajo’s core constituencies were issues the VP could have hardly helped – because to have acted as some in his core constituencies wanted would have even shrunk his ability to exert any influence on the government –  he also failed in many respects to do a good balancing act. For instance, shortly after he became the VP, he declared that the Niger Delta militants were not agitating for anything but their pockets. Again, must he take a frontal opposition to restructuring, which his people have championed all these years? Would it have hurt him if he had said he believed in restructuring but that there is a need for all stake holders to first agree on the meaning of restructuring and then the time frame for implementation? Perhaps one of his greatest mistakes was the persistent frontal attack on former Goodluck Jonathan, sometimes with questionable data. Since  Jonathan’s name remains a rallying point of a huge number of anti-Buhari forces, he succeeded in alienating that constituency, which in moments like this, would have provided him with useful noise value. The sum total of all these was to make many people in his core constituencies believe he was singularly focused only on pleasing Buhari – rather than trying to balance the loyalty expected from him to the President with sensitivity to the needs and expectations of his core constituencies.

Four, Osinbajo’s single- minded devotion to proving his loyalty to Buhari not only alienated several segments of people from his core constituencies,  but ironically may also have led to the different centres of power in the presidency, (including perhaps those loyal to his political mentor Bola Tinubu),  becoming very suspicious of him and his ambition. While it is natural for contending centres of power to devise schemes to cut their opponents and prospective opponents to size, what is intriguing in the whole Osinbajo scenario, is that Buhari, known for rewarding loyalty, has chosen to keep mute over the VP’s travails – despite the fact that much of Osinbajo’s troubles with his core constituencies are from defending him.

Five, the current travail of Osinbajo, if not well managed, will hurt both the VP and Buhari.  Already the whole saga has diminished the VP despite his bold efforts to keep a straight face. For Buhari, Osinbajo’s humiliation  may give credence to a certain narrative of ‘use and dump’, which some South-west politicians, opposed to Buhari, like to relish – the experiences of Obafemi Awolowo after helping the federal side win the Civil war and Lt General Oladipo Diya, who was Abacha’s second in command. Remarkably a big appeal of Northern politicians in the South is that they are assumed to be less treacherous than their Southern counterparts and are believed to reward loyalty more than their Southern brethren.  Osinbajo’s humiliation will therefore hurt a key part of the North’s bargaining chip with their Southern counterparts.

Six, despite Osinbajo’s current travails, it will be simplistic to believe that it is all over for the VP. It certainly is not. Four years is like eternity in politics. Besides, people’s emotions are very fickle. While the prevailing feeling in his core constituencies seems to be “serves him right”, that sentiment may not necessarily remain so if matters drag. We saw this in the MKO Abiola experience, when the Yoruba united to defend him, despite the fact that he was not a darling of the region (in part for using his Concord press to fight Chief Obafemi Awolowo, the region’s icon).  Besides, impeaching a sitting Vice President is not a tea party – as we saw in the dog fight between Atiku Abubakar and Olusegun Obasanjo. And if matters come to head, and Osinbajo decides to do a Mutually Assured Destruction (MAD) sort of fight-back (as Atiku did against Obasanjo), no one can predict the trajectory of such a fight or how it will end.