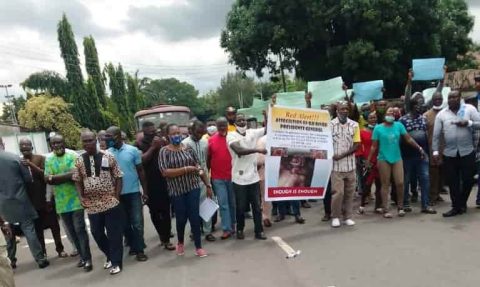 (AFRICAN EXAMINER) – The  Enugu state police Command says it has  commenced full scale investigation into the alleged gruesome  murder of a 67 years old man, Mr. Iloabani Eugene Anayo, of Amamkpunato Achi, in  Oji-River council Area of the state, by a yet to be identified culprit in a forest.

A statement made available to African Examiner  Wednesday in Enugu by the state police public Relations officer PPRO, Daniel Ndukwe Ekea, said “following a report received at Oji-River Police Station of the Command on 30/06/2020 at about 0800hrs alleging that one Iloabani Eugene Anayo (male) aged 67 years of Amamkpunato Achi, Oji-River was gruesomely murdered by a yet to be identified culprits in a forest in the community, the state Commissioner of Police, (CP) Ahmad AbdurRahman  has directed the immediate launch of a full-scale investigation to apprehend and prosecute the fleeing culprits.

“The Commissioner, while condemning such hideous and barbaric act, has warned and directed the Area Commander and Divisional Police Officers within Oji-River Area Command as well as Heads of Tactical and Operational Departments of the Command to deploy all resources at their disposal to fish out and prosecute the culprits.

“Furthermore, the CP has enjoined residents of the area, especially the youths; to maintain peace, avoid taking laws into their hands and/or acting in ways that could jeopardize investigation into the case. He made it clear that the Command, under his watch, will leave no stone unturned to bring culprits of the heinous crime to book.

The statement added: “Meanwhile, preliminary investigation shows that the deceased was found in Achi forest with several degrees of machete cuts on the head and neck regions, while the corpse has been deposited in the mortuary with investigation ongoing.

“To this end, residents of the State have been enjoined to remain law-abiding and assist the Police with credible information that will lead to the arrest of the culprits by reporting to the nearest Police Station.