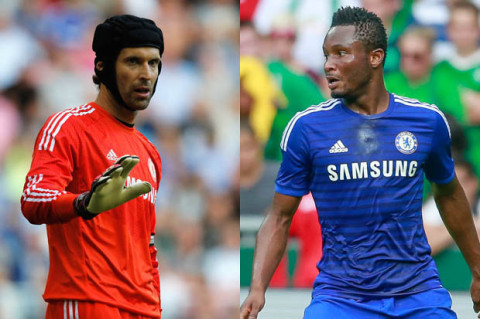 Either of Super Eagles midfielder John Obi Mikel or goalkeeper Petr Cech is likely to be axed by Chelsea in order to free up space for new signing Mehdi Benatia.

For this reason, one of Petr Cech and John Obi Mikel look certain to be leaving Stamford Bridge this summer.

The Blues are thought to be on the brink of landing the Roma ace in a £30m deal.

Jose Mourinho has been desperate to land a central defender after David Luiz’s £50m switch to Paris Saint-Germain earlier this summer.

He has been knocked back in his attempts to land Real Madrid ace Raphael Varane and Atletico Madrid’s Miranda, leading to the bid for the Morocco international.

Top flight clubs are allowed a maximum of 17 non home grown players aged over 21 in their squad.

And the Blues will exceed that limit when Benatia completes his switch to Stamford Bridge.

Benatia’s arrival will signal the departure of one of Chelsea’s foreign players, and reports from Stamford Bridge indicate that goalkeeper Petr Cech and midfielder John-Obi Mikel are the most likely players to depart the club.

Cech is set to be replaced as No.1 by Thibaut Courtois, after the Belgian returned from a three-year loan spell at Atletico Madrid this summer.

The Czech Republic keeper is being monitored by Real Madrid, PSG and Monaco, and is available for around £18m.

Meanwhile, Mikel is free to leave the club after eight years in west London.

The Super Eagles midfielder has been a mainstay of the side for several seasons, however, Jose Mourinho is thought to view the 27-year-old as surplus to requirements.

Inter Milan have been linked with a move for the midfielder this summer as they bid to improve their squad after a disappointing 2013-14 campaign.