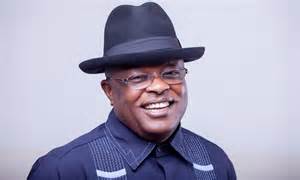 The development followed the present impasse between the state government and current leadership of EBSU ASUU.

Governor Umahi who made the announcement during a state-wide broadcast Thursday in Abakaliki, said the Bursar was relieved of his duty because of the faulty procedure that led to his re-engagement.

He however declared that the constitution of the present ASUU leadership in the university as illegal, and out of order since their tenure has elapsed.

AFRICAN EXAMINER recalled that the EBSU chapter of ASUU, had last Sunday by 12 midnight declared an indefinite strike, following some alleged unfriendly policies of the Umahi, led government.

Aside the Bursar, the Governor equally suspended the incumbent ASUU Chairman in the institution, Prof Ndubuisi Idenyi and his predecessor, Prof. Emeka Nwakpu, over alleged gross misconduct.

Commenting on the ongoing industrial action by the institution’s ASUU members, he warned that any lecturer who refused to go back to his duty post would not be paid his or her salaries, directing the State Commissioner for Education, Prof. John Eke to open a Register at the institution with a view to monitoring the level of compliance to his directive.

He urged the striking lecturers to call off the strike as the State government was prepared to ensure the restructuring of the entire University system in the state.

Hear him: “I hereby suspend all the checkup dues and deductions being collected by the Union.

“The present ASUU leadership in place has expired, the ASUU in place is illegal and I will not discuss with them.

Umahi continued: “The Lecturers should conduct fresh election for a new leadership

“Effective from Monday next week, any staff of the University who did not go back to work will not be paid.

“I appealed to them to go back to work, the Commissioner for Education should go to the school and put up a register to monitor the level of compliance” he stated.

Meanwhile, the development has paralyzed all academic activities in the university, as most students have travelled out of the state