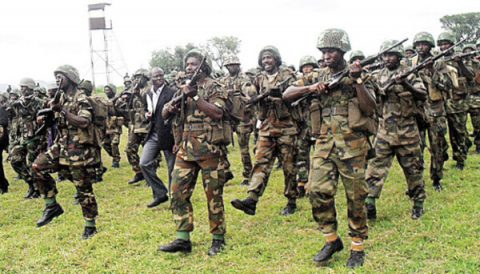 (AFRICAN EXAMINER) – The Nigeria Army has urged the media in the country to continue to properly inform and educate the public on issues of National security interest without biases, devoid of parochial interests, subjectivity and sensationalism.

It regretted that some section of the Nigerian media derives joy in projecting the nation’s Army in bad light via negative reportage, despite the sacrifices it has been making in protecting the territorial integrity and maintaining internal security in the country.

Speaking Thursday in Enugu during the opening ceremony of a  2-day  Directorate of Army Public Relations Civil-Media-Military Relations Summit for the East zone held at the Headquarters 82 Division, Enugu, the Chief of Army Staff (COAS) Lieutenant General Tukur Buratai, enjoined the media practitioners to always portray the nations Armed forces in good light, rather than pulling it down through negative and biased reportage.

According to him, the Nigerian media should help the  Nigerian Army publicise its activities  particularly as it relates to our routine exercises, namely; Exercise ATILOGWU UDO 1, Exercise AYEM AKPATUMA II and Exercise CROCODILE SMILE IV which are currently going on simultaneously in all the states of North Central, North West, South-South and South West Geopolitical zones”, he said.

The (COAS), who was represented by the Chief of Training and Operations, Army Headquarters, Major-General Enobong Udoh, said the Summit is in line with Nigerian Army’s resolve to create awareness about its operations routinely conducted in the country, adding that they are commitment to protecting Nigeria’s territorial integrity and maintaining internal security

He said: “the Summit is also intended to serve as a means of improving civil-military-relations and further enriching the knowledge and understanding of Army Public Relations officers, members of the press and all other participants particularly as it relates to the theme of the Summit, which is “Galvanizing Citizens’ Support for Military Operations in Nigeria through the Media.

“It is my hope that the media will continue to properly inform and educate the public on issues of National security interest without biases, devoid of parochial interests, subjectivity and sensationalism and in particular as it relates to our routine Exercises, namely; Exercise ATILOGWU UDO 1, Exercise AYEM AKPATUMA II and Exercise CROCODILEE SMILE IV which are currently going on simultaneously in all the states of North Central, North West, South-South and South West Geopolitical zones”,

The Army boss maintained that the exercises are not targeted at any group or individual, but are designed to fish out criminal elements in parts of the country, especially during the yuletide festivities.

In his remarks, the General –Officer Commanding, 82 Division of the Nigeria Nigerian Army Enugu, Brigadier-General Lasisi Adegboye, explained that the summit provides a platform for stakeholders to share ideas and innovative ways towards combating the contemporary security challenges currently facing the country as well as galvanize media and public support and co-operation towards the forthcoming Nigerian Army Exercise ATILOGWU UDO 1 commencing on 1 Nov 19 throughout the South Eastern States of the Federation.

Enugu state Governor, Ifeanyi Ugwuanyi who was represented by Secretary to the State Government (SSG), Professor Simon Ortuanya, in a goodwill massage applauded the Nigerian army for promoting excellence in its operations and expressed the hope that the programme will achieve its set objectives.

Delivering  a  paper entitled “The Military, Media, Peace and National Development, a senior lecturer at the Enugu state university of Science and Technology (ESUT), Dr. Ifeanyi Didiugwu noted that  the media have a major role to play in  shaping public perception about the Nigerian army and charged the army to strengthen its relationship with the media.