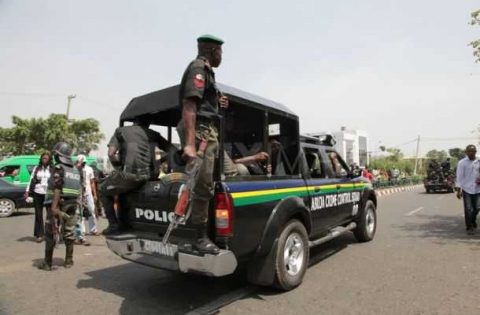 (AFRICAN EXAMINER) – Residents of Enugu state, South- East Nigeria, particularly those living in the state capital, have lamented the high level of intimidation and extortion of the people by men of the Nigerian police force in the guise of enforcing the state government’s order on closure of markets as well as ban on social and political gatherings.

They, however, called on the inspector General of police, IGP Adamu Mohammed, and governor Ifeanyi Ugwuanyi, to come to their rescue, insisting that operatives of the state Command of the force especially the Special Anti-Robbery Squad (SARS), have turned the enforcement assignment given to them into money making venture.

Government had introduced the lockdown measures to prevent spread of the deadly coronavirus, also known as COVID-19 in the state, which has recorded two cases so far.

Following the police extortion and harassment, most of the residents now live in fear of the security men who they also accused of incessant raids on street shops, and artisan workshops such as mechanic, vulcanizer, and welding workshops.

Many who were victims of such raids and arrests alleged that they paid various amounts of money ranging from N5000 to N8000 to bail themselves and regain their freedom.

According to one of the victims, who craved anonymity for fear of further harassment said, sometimes the negotiated bail payments are done before reaching the police stations.

He said “Specifically, on Saturday April 4, 2020, police officers from Ogui Road police state raided some shops at Nwosu Terrace, P&T Quarters, Enugu and arrested some shop owners and their salesgirls and boys.

During the raid, one Mr. Uche, a tricycle spear parts and electrical appliances dealer, popularly known as Ndudinegwu and his sales girl, as well as his neighbour who’s a printer were arrested alongside other people, and  were taken to Ogui Road police station where they negotiated their bail and that he paid N8000 to bail himself and his sales girl” the victim revealed.

Again, on Wednesday April 8, 2020, men of the Special Anti-robbery Squad (SARS) Enugu raided the same street and arrested six boys whose age ranges from 18 to 26.The six boys were arrested in a barber’s shop, even as the operator of the shop was among them, another victim told our correspondent.

He gave the names of the six boys arrested to include, Obinna, J-boy, Nnaemeka (operator of the barber shop), Victor, Collins and David.

They were taken to the SARS office at Gulf Estate Enugu, where their neighbour, Mr. Michael Nkwocha came to bail them at N5000 each making it N30, 000 for the six of them.

Confirming their arrest, the boys told newsmen that the SARS officials accused them of smoking marijuana and also flouting social distancing order, an allegation  they denied as non was found on them.

One Mr. Michael Nkwocha who took them on bail lamented that the boys, who are either unemployed or still in school were yet to refund him the money he paid in bailing them.

Another resident of the area, who spoke on condition of anonymity regretted that whereas some youths and families in other parts of the country were being paid social intervention and palliative allowances, those in Enugu who are trying to survive the biting effect of the nationwide lockdown are being extorted money from and exploited by law enforcement officers.

He called on the state governor, Ifeanyi Ugwuanyi and commissioner of police to come to their rescue and call the police to order, stressing that only markets, beer palours, as well as social and political gatherings were banned and not street shops and essential services like mechanic workshops, restaurants and those selling spare parts.

The resident insisted that unlike Lagos, Ogun and Abuja, Enugu is not on total lockdown and that law enforcement officers should stop taking advantage of the situation to exploit the people.

African Examiner reports that the State Government had ordered the closure of all land borders and inter-state transportation in the state till further notice, with effect from 6pm on Tuesday, March 31, 2020, except those on medical emergency services.

The State Government equally ordered the closure of all markets in the state, “no matter the size, till further notice, with effect from 6pm on Tuesday, the 31st day of March, 2020 except those dealing in food items, water, pharmaceuticals, medical equipment and other basic items of daily domestic need who must comply with the standard hygiene protocol as stipulated by the Nigeria Center for Disease Control (NCDC), including frequent hand washing with soap, use of sanitizer and social distancing.”

The State governor, Ugwuanyi similarly, in a state broadcast, banned all social and political gatherings, including marriage and burial ceremonies, masquerade festivals, drinking bars, night clubs and all group sporting and recreational activities.

Efforts by our correspondent to speak with the state Commissioner of Police, Ahmad  Abdulrahaman, or the state  Police Public Relations Officer, PPRO,  Mr. Daniel Ekea, on the accusation  hit the rock,  as their mobile phones were switched off, as at the time of filing this report.