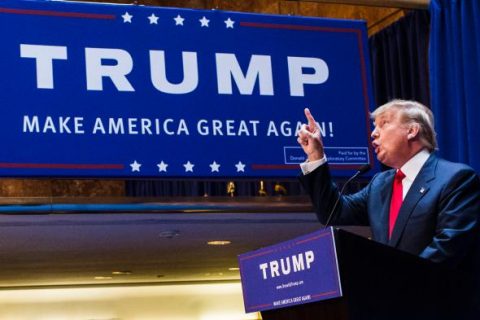 – Obama insists Trump can’t be trusted– Just a day to the election, Republican flagbearer Mr. Donald Trump has again strongly hit at his Democratic counterpart, Mrs. Hilary Clinton, saying her clearance of new email by FBI is a fraud.

Speaking at a campaign, Trump, who had earlier described FBI agents decision for investigating his rival as “great”, declared that the Democrat was protected by a “rigged system”.

FBI Director James Comey in his clearance letter indicated that the agents have been “working around the clock” to examine the new emails but “have not changed our conclusions”, which is that Mrs. Clinton had been careless but not criminal.

After revealing Clinton was being investigated, the FBI director was accused by senior Democrats of abusing his position by releasing the information so close to the election day.

The revelation has subsequently occasioned a head-to-head voting in the last two weeks, between Clinton and Trump especially in the remaining swing States.

In the meantime, incumbent President Barrack Obama has again justified reason for voting or against the Democratic and Republican candidates.

Speaking on stage in Florida to rally support for Mrs Clinton, Obama said: “I’ve got two daughters and they are magnificent because my wife is magnificent,” he said.

“We have taught them they can do anything a man can do and then some.

“And our friends who have sons have taught their sons to respect women and judge them on the strength of their character, and not demean them and not put them down.

“They say ‘Oh he doesn’t mean it, it’s just locker room talk, once he gets in office he’ll be different’

“But let me tell you, I’ve been here almost eight years and who you are, what you are, does not change. It magnifies who you are. Shines a light on who you are.