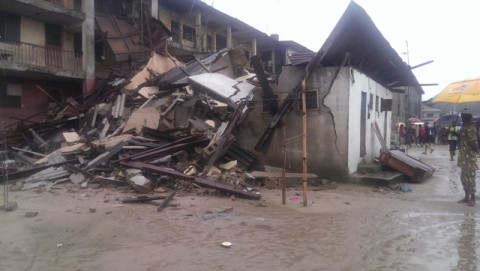 No fewer than 100 people escaped death on Monday night at a police barrack in Lagos, Nigeria when a dilapidated two-storey building suffers partial collapse.

The building located at the Police Barrack at Pedro area of Somolu caved in around 8:30pm on Monday, with rescue operators thronging the barrack to rescue victims. 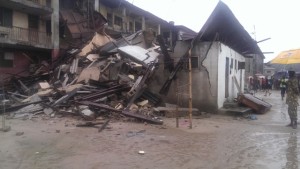 The two-story building has 27. Part of the building ripped off and collapsed to the floor around 8:30 pm while LASEMA came to the scene for rescue operation around 8:53pm.

LASEMA officials condoned off the building as its occupants were evacuated to avert further danger.

The dilapidated building was supported with wooden frame to prevent the building from collapse, but eventually collapsed after the wooden frame gave way.