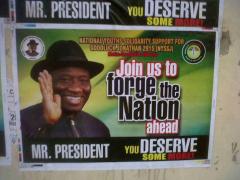 Although, the President has not formally declared his intention to re-contest, but some pressure groups and most of South Eastern governors have continued to drum their support for him to that effect.

African Examiner leant that the colourful posters with screaming inscription such as “Join us to forge the nation ahead” , “Mr. President, you deserve some more”, was by courtesy of a group called National Youths Support for Jonathan (NUSJ), 2015.

The posters were displayed at strategic locations such as stadium, local government headquarters, and major streets in the city.

Reacting to the development, some residents of Enugu who spoke to African Examiner on condition of anonymity on Wednesday said it was absolutely wrong for the President to begin campaign when it is not yet time to do so.

“We expect President Jonathan to lead by example, though, he may claim he is not aware of the posters in various states, but I want to tell you, as an average Nigerian politician who wants to perpetuate himself in office, the President cannot deny knowledge of the posters”

“But I think it is too bad for Mr. President to be more interested with his re- election bid, rather than thinking of how to tackle the litany of problems confronting Nigeria as a nation”

“He should be more concerned with how to improve our dwindling power sector, cost of building materials, bad Federal roads, revamping our refineries, as well as the insecurity challenges”, another respondent, John Eboh stated.

“The President, has been moving from one part of the country to another campaigning in the name of PDP unity rallies, an action that is capable of heating up the political space”

“So, what am saying is that the Independent National electoral commission (INEC), must rise up to its responsibility, and device a way of sanctioning any aspirant that flouts the electoral law of the land, no matter whose ox is gored”, Eboh reasoned.

He added: “I want to also use this medium to advise Nigerians to be wary of sycophants and some of these selfish and desperate politicians, who claim to be democrats, whereas, they are dictators and tyrants.Nigerians must do away with unnecessary sentiments why taking decision in 2015, they should not allow any body to deceive them again, because, he who goes to equity must go with clean hands who have suffered enough in this country”