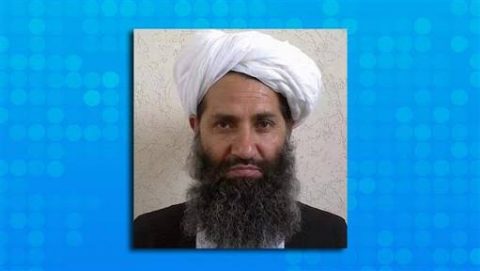 The announcement followed the killing last weekend, of its immediate past Leader, Mullah Akhtar Mansour who was killed in a US drone strike.
Mansour was killed in a strike on his car in Pakistan’s Balochistan province last Saturday.

In a media statement, the Taliban for the first time, acknowledged Mansour’s death and named Akhundzada as his successor

Giving the hardline posture of its new leader, pundits have predicted it is unlikely the group changes direction under Akhundzada, who is a religious scholar

In the meantime, a faction of the group has rejected the move, contending that Akhundzada does not represent the organization.

The present deep division in Afghan Taliban is traceable to the group’s Founder, Mullah Mohammad Omar’s death and his replacement with the immediate head, Mansour few years back.

Akhundzada was ex-head of the Taliban courts and deputy to Mansour.

The new Taliban Head is more of a religious leader than a Military Commander. He is believed to have been responsible for issuing most of the Taliban’s fatwas (verdicts).

He is also to be 55 years of age and has lived most of his life inside Afghanistan, with little evidence of travel.